It is a great low key event organised by Sheffield Running Club. The numbers that enter are always small compared to the South Yorkshire League events, which is a shame as it is a very well run event and there are some very generous prizes on offer too.
6 striders braved the cold and snow this year

The woman’s race (6.5km) had 23 runners and was won by Helen Berry from Holmfirth Harriers. Striders results:

The men’s race (10km) had 33 runners and was won by Philip Radford from Hallamshire Harriers. Striders results were:

The full results can be found here.

Phil Dooley also kindly sent in a quick write up of the event:

6 Striders braved the snow and cold to turn out for the Sheffield Open Cross-Country race which was held at Graves park. The event is run by Sheffield running club and hats off to the marshals for standing in the cold and supporting all the runners.

The course is an ideal preparation for the upcoming cross-country at Pontefract and was very undulating, slippy, muddy and snow in places which made it a pretty tough run indeed. However it didn’t stop Magdalena Boo smiling all the way round as she finished 20th in a time of 40:23.

Well done to all who took part. 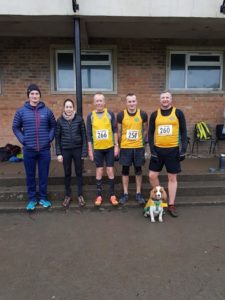