Another great Striders event which saw Andy Green make his debut as Race Director. Huge thanks must go to Andy for stepping in and filling the huge void left by John Crossland. However, it was great to see John out on the course supporting and guiding Andy through the day so many thanks to you both. Thanks also to all the volunteers who gave up their time to support the 380 runners who participated at some point or other throughout the day.

This year, the men’s title was reclaimed by Totley AC from Dark Peak, who surprisingly never entered a team. The winning margin from Striders Men’s A team was 15 mins, averaging out at 3 minutes per leg faster.

The Striders Women’s A team held onto the title they won last year as they managed to push Totley’s A team into second place, winning by a mere 6 minutes over the 5 legs. Excellent result from the women’s team. 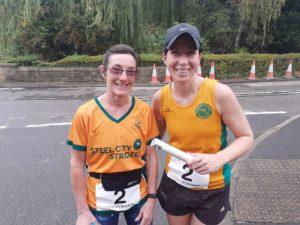