This was the race I accidentally did instead of the Hardwick 10k, because I’m too dumb to fill in a calendar properly. I regret missing Hardwick but I don’t regret doing this.

Sheldon is a little village near Bakewell, in the limestone White Peak (this is relevant). You reach it by driving up a very big hill (this too is relevant). It’s very picturesque, there’s a lame story about a duck (https://www.wondersofthepeak.org.uk/facts/the-sheldon-duck/) and they look after their benches very well. The fell race is part of their village’s annual celebration, though we’d have had to hang around until Saturday for the egg throwing, bottle darts and bee walk.

This year the race was part of the Striders fell race championship, so there was a healthy turnout from the club. As we were waiting round, Bob told me there was a difficult climb to come. He wasn’t kidding.

After admiring the many village dogs, I joined the rest of the runners on the start line. The race starts off on the main (only) road, and runs for about a quarter of a mile before turning sharp left and across a field. So far so ordinary. Then all of a sudden you’re plummeting, losing 140m in the next kilometre, with the gradient reaching over 30% near the bottom. I’d been to the physio the previous day because of a painful nerve in my heel, so I ran down the hill a bit gingerly, but apart from the odd painful twang it was fine. (Chapeau to the physio.) It did give me time to wonder how exactly we were going to get back to the village though.

Not to worry. We turned left and ran along a scenic track by the River Wye, flat and fairly fast for about a mile. Then the trail started to climb the side of the valley, gently at first. We were under trees now, and as the track got increasingly run-along-the-side-of-a-valley-ey, the fact that we were running on limestone got increasingly relevantly slippery.

And then we climbed back up the hill. All of a sudden, we were at the bottom of a 40% gradient, covered in loose stones. It was getting warm now, and the humidity really started to make itself felt as I trudged up the slope. I did not run.

Finally, though, we were over the top and into the last mile, which was a happy (if tired) gallop across fields and the race car park, before turning back on to the village road and pelting down the hill to where we’d started.

It was only a short race – less than 6km by my Strava, though the FRA say it’s 6.4. It’s a fun one though, and a proper village event. I was knackered by the end.

Of the 174 finishers, 24 were Striders, among them first female Caroline Brock (in 27:53). Paul Stuart also walked away with the prize for fastest male V50  (photo below). Note the wording of that sentence…

The race was won by Alex Ediker of Buxton in 24:14, who was also fastest “Junior”. (The categories are very confusing.)

(Note that the village webmaster will no longer be maintaining the results page! http://www.sheldonvillage.org.uk/fell-race/) 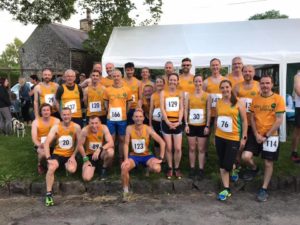 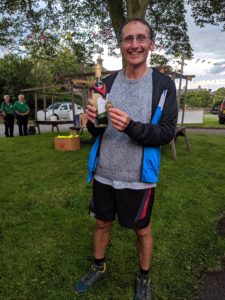