The Sherwood Pines 10k is part of a new running series to mark 100 years of forestry. It was the first time that Sherwood Pines played host to the 10k race, but there is a park run through the forest each Saturday morning. The race was a 2 lap course through the beautiful forest. In parts, and mainly uphill, the paths were wide enough to overtake while the single tracks deeper into the forest tended to be more on the downhill.  There were just over 370 runners in total. Trail shoes were definitely needed with a mixed terrain of stony paths, tree roots and mud in places. The hills were long (or felt it) and even though they were not particularly steep, they took their toll. 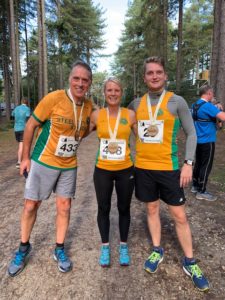 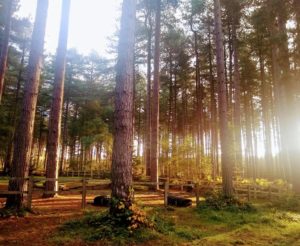 I wasn’t the only Strider, Clive Downing and Max Allen also ran. It was Max’ first race as a Strider too. Whilst max was the first male strider home, Clive came 3rd in his age category and I was 6th in mine and first lady strider, (well, only female strider, but I’ll take that, might never happen again!!!) The race was really well organised, lots of marshals and slightly worryingly, lots of St Johns ambulance! The best bit for me was no queue for the ladies toilets. Which to be honest is rare. No queue either to pick up your number or drop your bag at the bag drop which was conveniently on the start line. There was also enough parking and with a discount code it was only £2. With it been less then an hours drive from Sheffield it is a race I would do again.

We received a eco-friendly wooden medal, and bananas and Jaffa Cakes were in abundance on the finish line. I always think any race is worth it if you get cake of any description. 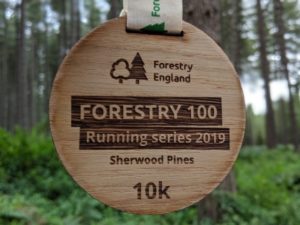