This large run event features 10k and half marathon distances amongst others.  The routes use the temporarily closed main roads in Manchester City Centre roughly between the car parks of two football stadia.

This year, the weather was good for running; cool and dry with the odd spot of sunshine.

There were an awful lot of runners!  My half marathon started 10 minutes after the first wave which was just as busy.  After surviving the attentions of a large local hound and his owner who assured me that he had already had breakfast, we were off.  Slowly.  Runner congestion seemed to be a constant for the first kilometre or so although that only shaved a bit off the pace.  Well, mine at least.

The course, being largely city centre streets is a bit dull to be honest although a few hardy souls turned up to cheer and thus enliven proceedings somewhat.  To stop runners auto piloting for the whole course, there were other things happening, mainly of the very loud musical variety.  Interesting how ear pain increases speed when running – a new training incentive perhaps?

A possibly unique course side event involved a number of young ladies on a large podium who were working hard at a spin session; I know they were working hard as they had stopped by the time I passed them again.  Yes, the Manchester course meant you got to see stuff twice.

The full results for the runs are here.  Categories don’t seem to be included. 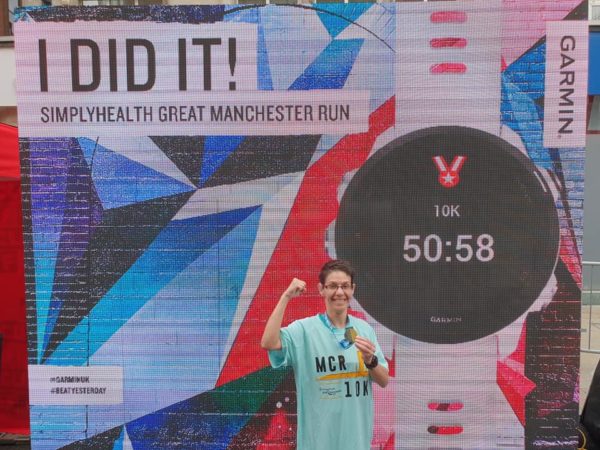