The Slieve Donard Race takes place in Newcastle (no not that one… no not that one either). Newcastle, County Down, Northern Ireland. My in-laws moved there about a year ago, “Where the Mountains of Mourne sweep down to the sea”. Having recently been bitten by the fell running bug, I found myself thinking, “I wonder if anyone ever runs up there?”. Well, a recent BBC One ident and a quick Google search confirmed, “Yes Joe. Yes they do.” Not only that, but folks have been racing up the Slieve Donard (the tallest mountain in Northern Ireland) for the past 70 years! The logical next step was obviously to sign myself up and selflessly schedule a trip “to visit the inlaws” in 2019.

The race is 10km, with an 850m ascent up the mountain. It starts at 2pm in Newcastle town centre where around 160 of us gathered, made up largely of the Mourne Runners and Newcastle A.C. Having literally no clue where I was going, I decided to start at the back and follow a local, if I could find one slow enough (these guys are hard-core!). After a brief dash along the seafront (the last time I’d see anything approaching flat for a good long while) we turned in to Donard Park and immediately started the ascent through the woods. We followed the river up the mountain, past the gate that featured in the above mentioned Mourne Runners BBC One ident.

I tried a little “Up next on Casualty”-based hilarity with one fellow runner, who was no-doubt too focused to laugh (maybe he’ll get it later). Or maybe he just knew that this race was no joke. The climb up the mountain took me the best part of an hour, and ranged in steepness from “This is just about runnable” to “Screw this I’m just gonna walk”. The only slight let-up was 10 wonderful metres of relative flat before the final ascent up to the summit. A summit which, I might add, is one of those pesky hidden ones – just when you’ve psyched yourself up for one last push to the top, the top suddenly becomes another few hundred metres away. Many an “FFS” was uttered amongst the group I found myself in – fortunatly there were no children present, though we did manage to startle a few grouse (seriously!).

When we finally did reach the top, we were greeted by pats on the back from the group of hardy marshals that had braved the changeable Northern Irish weather and it was off along the only real flat section of the race – across the top before diving down the front face of the mountain. It’s worth mentioning that the view from the summit was probably the best I’ve seen in any race I’ve entered. Despite tip-toeing over the rocks and literally trying not to fall off a mountain, it’s not lost on you that you’re in one of the most beautiful landscapes there is. 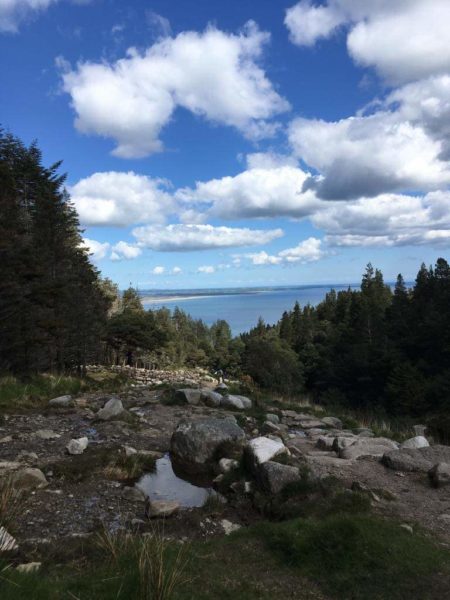 The next section of the race takes you off the marked paths and straight down the front of the mountain towards the sea. The steepness here was really startling for a mountain-noob like myself. No “pointing myself at the bottom of the hill” and “just letting my legs go” here. Instead, what followed was possibly the most gingerly taken decent in Strider history. Bog, followed by rocks, followed by heather, followed by more grouse. All at about a 45-degree angle. In the end I used the old tactic of following someone else and letting them make all the mistakes. The guy in front was an absolute lunatic from Munster A.C. who crossed the line covered in what looked to be half the mountain. I however got off relatively scot-free (I may owe him a pint).

After nearly 20 minutes of thigh-destroying decent, we finally wound left onto some heavenly gravel track and headed towards the final section of the race.

And it’s at this point when you’re faced with a dilemma – we were told at the race briefing that there is no set route for this section. You can either take the lovely, gait-friendly gravel path or take the more “as the crow flies” unmarked route through the woods. Being an “in for a penny…” kinda guy, I took the latter, and was followed by just one of my fellow racers. He no-doubt assumed I knew what I was doing and, no-doubt, instantly regretted his decision. We had to negotiate fallen trees, massive rocks, tents, small children, BUT you can’t argue with results – we took about 2 minutes off the rest of the group.

In summary, this was probably the toughest race so far in my, admittedly short, running experience. Not a long race but very steep. Enter this race if;

– purpley-red is a good colour on you.

OR run it for the spectacular view at the top and for the challenge. The folks in Newcastle A.C. have some serious running chops and a good sense of direction. I have neither – this was a triumph of “Don’t embarrass yourself in front of the in-laws” over any kind of actual aptitude. None the less, it’s one of those races where the toughness just makes you want to train harder – for next time. Bring on 2020!