This is the perfect antonym for last week’s Isle of Axholme Half; where that was flat and you couldn’t see the river, this extraordinary, magnificent race has three huge climbs and water everywhere (including in your shoes and in your pants).

The Met Office Yellow Warning of very heavy rain will have accounted in large part for the vast number of DNS runners – 660 out of an entry list of 3,000, but all six Steel City Striders entered were here; James, Fran, me, Matt, Phil and Emma, though not in that order on the start line. It rained heavily all the day and night before, and right up to start time, explaining why so many were late out of the Event Village shelters.

From the start line, just out of Llanberis past the Snowdon Railway station, the route sweeps through what has to be called majestic landscapes. In the first 5 miles up to Pen y Pass we pass Dolbadarn Castle, Llyn Peris, relic of slate mining, Nant Peris, the Cromlech, and squeeze between the eastern slope of Snowdon and the western slopes of Y Garn and the Glyders, Fawr and Fach. Just 850 foot of ascent. I passed Emma just before Pen y Pass.

From Pen y Pass, start of both the Miners’ and Pyg tracks, we dropped down to the Pen y Gwryd Hotel, training base in 1953 for Edmund Hillary’s successful Everest team. The view of the Gwynant valley at this point is simply breath-taking (though obviously I managed a comment or two out loud). And then the fun really started as we left the road to take a ‘track’ (not the last one on the route) for two miles down into the valley bottom. A support team and a smooth transition to trail shoes would have been helpful. Snowdon was now high on our right shoulder and we started to catch glimpses of snow on the top. Down at the base of the mountain things were now dry and warming up, so layers were being peeled off – my buff went in the back and gloves in the front of my shorts – and I was so thankful for that padding later. It was on the trail section that I caught up with a happy-faced Phil Dooley.

Back on the road going was good and the road surface smooth and wet. The staff of YHA Bryn Gwynant, where I celebrated my 13th birthday, were out at the end of their drive – support, though obviously thin on the ground, was really hearty. Matt Gibson came into sight before mile 12, just before Beddgelert. (There’s a story of devotion for you.) I think we were on water station 5 by this point, one of which had the ‘isotonics’ in cups. The village had turned out to watch us go through.

And then the second hill started, immediately after the village ended. About half the height of the first, without quite the same grandeur, but it took its toll and many a runner became a walker. The wind had dropped so much that the breeze disappeared and the next lake, Lynn y Gader, had the classic glass-like surface and the hill and forest beyond was perfectly mirrored. I may have been alone in mentioning it? My oldest brother, Ian, once described his (former) mother-in-law as being ‘unable to have a silent thought’. Oh dear.

At Rhyd-Ddu I had the first and second of eventually five stops. They were using the same foil-topped water cups as at Epworth last week, and I was making a point of taking one pretty much every time. This one went ‘down the wrong way’ and I had to stop to cough and choke and have my back whacked by a stern but well-meaning Welsh woman. As I set off again I stripped off another layer (this one being the vest under my outer top) and accidentally dropped it. A quick double-back was needed – good job we practise those on Club runs – to pick it up.

I knew mile 18 would not be good. This brought the race to YHA Snowdon Ranger, alongside Llyn Cwellyn, and of immense family significance.

It was here that my older brother, the wonderful, beautiful Billy, had worked in the time after graduating from Aberystwyth University in 1980. He’d studied History and had no intention of doing what most History graduates do – teach History. He loved Snowdonia, the mountains, climbing. The two summers before had included massively successful Alpine climbing seasons, and so, for want of something he actually wanted to do, he followed me, our sister and our parents in working for YHA. Back then it was split shifts as Hostels closed from 10 until 5. October 23rd, and he finished work at about 11, heading out by himself somewhere local for a few hours. By chance I was at home in Ellesmere Port with my parents when the Police came to knock on our front door and bring the worst news possible to any parent. Billy had not returned that evening to the Hostel, he was missing and a full alarm had been raised. My dad and I and three of his friends gathered in the car park at the Hostel as light broke the next morning. Llanberis Mountain Rescue team were there in force, ready for whatever the situation would bring. I was asked to check his room, and I identified which climbing guidebook was missing. Only years later did I recognise what the MR team did next, and how incredibly protective they had been. My dad and I, and one of his mates, Terry, were dispatched with a Mountain Rescue search dog and handler onto the western Snowdon slopes, moving away from the crag I had just identified. Billy was found within two hours and his body brought down off the hill, with skill and all possible dignity. The last time I was on this road was the day of his cremation, when I escaped the tension inside me by riding his bike as fast and as carelessly as I could down to Beddgelert and back. He was special lad, loved and admired. He would have made the world a much better place had he been able to spend more time in it.

I stopped here and looked up at the window of his old room, and out across the valley, and I cried, and cried out in the pain of anguish and loss. I could still feel the tightness of the hug Matt Grunhill gave me that day 39 years ago, as an ambulance stood in that same car park. Today I was checked on by a lovely lady who offered me her hand and a guy who offered gels and drinks. But you have to carry on, you just have to. You don’t run to stop the pain because it doesn’t do that; you run so that you learn to handle it. And we haven’t come this far to only come this far. And so I had to start again.

Miles 18 to 22 at Waunfawr are less spectacular, but there is a nice narrow gauge railway line alongside and an imposing shoulder of hill to the right that you know you are going to have to go over at some point. That point is at Mile 22. (More sweets, more gels, more water.) Two more miles of uphill, at an angle that looks like the slope on the side of a Welsh woman’s stovepipe hat. It starts as a road, but gets worrying when you turn onto another that is marked as a dead end. Then it becomes a track to disused slate mines, then a farm track and then a track.

The final top is at Mile 24, and I may have been hallucinating by this point, but I swear there was a refreshment stall staffed by the White Rabbit, The Mad Hatter, Alice in Wonderland, The King of Hearts and a woman with make up like David Walliams’ ‘I’m a Lady’ Emily Howard character. I stopped for a proper cup of tea in a proper cup and had a little chat.

Sounds a little odd so far? A bit like Dronfield Town FC 10k, with its fields and stiles and nettles, but more so? It got even more ‘challenging’ for the next mile and half. 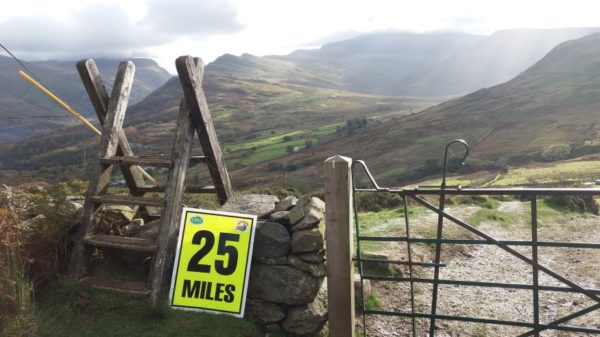 Does that say “miles”?

The drop down to Llanberis was ridiculous; waterlogged trail with slippery short grass, puddles and cold, wet mud, and road shoes on a downward slope frequently steeper than one in seven – check out the ‘hilarious’ footage of the actual race at this point here. This is where I went for the easiest 10m of the race (a side-slide on smooth and accommodating grass). I sat and laughed for a while. Mud from ankle to arse and elbow – looked like I’d ‘had an accident’, but no bruises thanks to the padding of tucked in extra clothing.

After the plummet into the village we got onto a brilliant closed road section for the last point two of a mile. I remember being unable to lift my arms to shoulder height at York last year but the crowd here, on both sides of the road, carried a huge wave of joy and I whooped and punched the air and ran, actually ran, to the finish line in four hours, one minute and a few seconds. 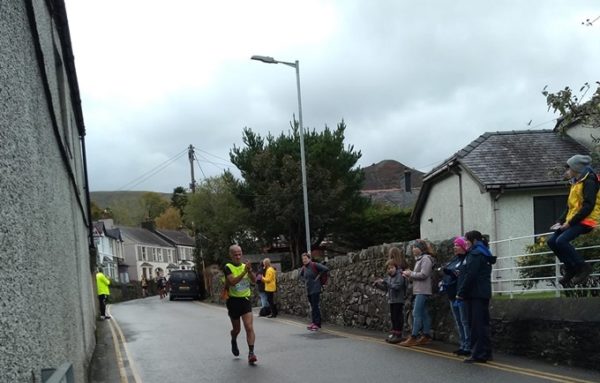 Absolutely brilliant event, amazing views, great slate coaster, rubbish free t-shirt (the good ones are extra). Fran Cummins was at the finish area, having done her race half an hour quicker than me and she was already wrapped up warm. James Rose was so quick I caught not one sight of him.

After a shower in the football club I stood, next to a Dark Peak runner, in that finish funnel crowd and cheered for an hour, seeing Matt, Phil and Emma finish. The big font size names on the race numbers made it easy to be personal and you could see it lift each person we called on.

I am booking my hotel for 2020 before I leave in the morning. I’m not telling you when the entries open in case it spoils my chances of getting in again, but the new ballot system for next year may do that anyway. This was epic, and I did feel euphoric.

Start line video here (I’m over 4 minutes back, wearing what appears to be a swim cap and my Striders Run Leader hi-viz. You just cannot be too careful out there.)