We were last here for Cross Country in 2017, a wet winter and a horrid day with icy conditions and waterlogged ground. This time there had been so much recent rain that the park was cut in two by the overflowed stream and so a convoluted route was set up for the series of races on the day. The race organisers had done a great job in managing to put this one on at all. 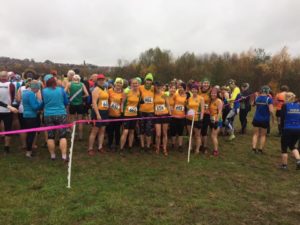 Steel City Striders had a very good turn-out, and even though we sorely missed Peggy and Louis Woodn’t, we had 14 women and 21 men in the two senior races. The tent, now very wet inside and out and desperately in need of a Church Hall or heated garage to dry out in, was proving indispensable. As seems to be the regular weather pattern, it was wet before and during the senior women’s race but warmed, dried and brightened a little just in time for the men’s.

For the senior male runners this meant that 40 laps had been run on the waterlogged, sloped, cambered and soft parts of the circuit before they even set off. Despite our vast collected experience we had runners stopping to fasten laces in the first 100m and even stopping to find and replace lost shoes! There were hushed, whispered, worried predictions of how many times Andy Heyes would lap each runner.

As a brief summary of the four laps of the men’s race, I’d go:

Lap one – fun, fast and laughter 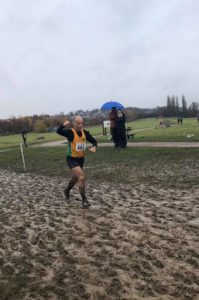 I think one of the spectators behind me is a nun animating Edvard Munch’s ‘The Scream’.

While Joe Sweetnam-Powell was up in the top ten, making the transition from off-road avoider to off-road specialist look easy, the rest of the men were measuring their relative success by which lap we were on before the winner, the aforementioned Andy Heyes, lapped us (lap three for me, but only just).

This was, like schools’ XC the day before, ‘proper’ cross country. My poorly feet that suffer from Plantar Fasci-whatsit came away from today with no aches or pain at all because the ground was so soft- all the shock of hitting a road surface was gone. My thighs ached instead, and my chest worked as hard as my determination had to. A lot of the test of XC is internal – pushing to keep going when it would so, so much easier to stop. Ben described how on the first lap he hit the racing line at every corner and between them, and then on laps two and three veered off onto the greener side-lines. But by the final lap he was back on the straightest line as the mud was now spread so wide it would be no advantage to run faster but a long way further.

If the Reader is still not sure, or thinks this is madness; it likely is, but was run by many in shorts and racing vest. Yes, some wore gloves and hats but most peeled them off as the racing progressed. 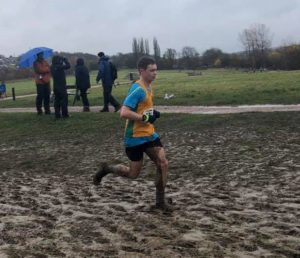 We all got filthy, and then laughed about it afterwards. Some took a ‘Rotherham Bath’ right there in a temporary puddle. We really enjoyed the event, and will do again at Penistone (Sunday 8th December) despite its reputation for windy conditions over the top edge of the Showground. 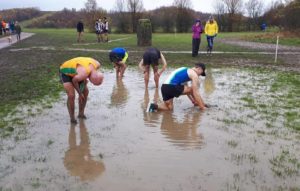 We still have some numbers (free to Striders) if you’d like to come and give it a go.

I will leave the discussion about the anachronisms of XC to another time.

One observation – We saw Nicola Devine, the women’s race winner, running to the event from Rotherham – that’s about 10 miles. So we’ll be running to Penistone from Grenowoods, won’t we?

One explanation – the hot chocolate disaster was in two parts. First the pump flask tipped over as we took a sharp right on a roundabout, and the second is that it split in the boot of my car. Sorry for the disappointment and failure to deliver on a promise: I have let the team down, I let Matt Burgon down, and worse, I let myself down. On the plus side the rubber ‘rear load liner’ that I bought with the new car is paying for itself nicely.

And finally; I have never used the word ‘aforementioned’ before and, frankly, I’m surprised to find that it is one word.