Firstly I couldn’t believe my eyes when I opened the curtains and saw the snow but up I got and had my coffee with some porridge and berries followed by a banana.

At 8.30am we set off up the M1 and M62 to Cleckheaton in West Yorkshire; surprisingly when we arrived it wasn’t too bad just some patchy rain.

We were asked to assemble on the running track where we’d be given a quick race brief before setting off at 10am prompt for a lap off the track and heading out onto the streets of Cleckheaton for the unknown 20-mile run.

I’d read the description of the race when signing up about it being an elevated 20 miles and good marathon practice but I was thinking I run the hills off Sheffield on a regular basis so this will be a walk in the park (how wrong could a person be) we’d no sooner set off when the first mammoth hill appeared before my eyes so off I slogged up it thinking blimey this is harsh for a long run and as we always tell others where there’s an up there’s always a down but not on this beauty there isn’t it just goes up then flat then up again.

I met a lovely chap who I ran with from mile 2 to mile 6 but I was slowing him down so told him to carry on and enjoy his run. At mile 7 you reach the water station and carry on bearing right at the junction – at this point the speed runners were running back the opposite directio. We ran round in a giant loop and like the speed runners ended up running back along past the water station (this was now mile 11.5) and along the same route we’d run previously back up yet another hill where I passed fellow Strider Matt Conell. He was flying along and had passed mile 16 at this point. I was rather envious of his position and jealous at how near to the finish line he was but on I plodded along country roads and hills to the point where I’d passed Matt, at this point thinking at least I’m nearer the end now back along the same stretch of road back to the water station now at mile 17 thinking more and more of the finish line. Eventually I hit a stretch of road I remembered and this stretch was the same road we had driven in so I knew I was near the end.

I passed my husband and son who looked amused when I shouted to them that I’d just suffered 20 miles of torture for a bargain price of £14.50.

Back through the car park around the back of the clubhouse and round the last 300 metres of the track to the finish line.

Both Matt and myself could easily have pulled out of this race at various times so it’s probably a good job we didn’t know the area so had to finish.

I would definitely run this race again next year, so I would recommend it to anybody who is London Marathon training. It’s an excellent 20 miles but I’m not so sure that Matt shares my opinion on that one 😂. 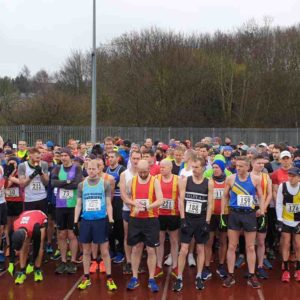