The St Cuthbert’s Way (SCW) ultra is a race the length of St Cuthbert’s Way – from Lindisfarne to Melrose – a distance of just over 100km. A 45 mile version starts in Wooler. This is Trail Outlaws’ flagship event – I’d done a few of their other events which had been well organized, so I was looking forward to this. It was also my “A” race for 2019 – the one I’ve been training for since December, so what follows is a bit of race report and a bit more musings on what happened etc etc – feel free to stop reading after the actual results bit!

Race HQ was a Melrose Rugby club (again –  I am beginning to love/hate this place) and us 100km runners had to register on Friday afternoon/evening to be equipped with trackers(!!) sign various forms, be issued with finishers Tshirts (seems a bit optimistic) etc. As usual, it was well-organised and we retired to the hotel ahead of the 6:15am (eek!) bus in the morning.

Saturday morning, and we headed off in the bus to Lindisfarne. You begin to realise how long the run will be when it takes 90 minutes to drive to the start. Normally you would do SCW from Melrose to Lindisfarne (as did St Cuthbert) but Lindisfarne is cut off by the tides for 4 hours out of every 12 which would make finishing there a bit tricky. The coach car park has public toilets which were well used before we trudged over to the priory and the starting point for a group photo and race briefing.

A brief countdown, and off we went! I was feeling good – I knew the route, I’d slept better than I’d expected, nutrition was all sorted, a full 2l bladder of Active Root. I could have been faster and slimmer, but everyone can say that and all I was hoping for was a finish within cutoff times (3:30am Sunday morning).

The SCW follows the road along the dunes and towards the causeway. We passed the pilgrim route marked with poles and shortly after that I realized that my leg was sore. Looking down, I discovered that the inside seam of my leggings had split and I was already chafed on my left leg. Argh! I was wearing my favourite Sweaty Betty leggings, partly to act as sun block, and partly as protection from the nettles, brambles, heather etc beside the paths. I’d used them for years, they’ve been in and out of the wash a gazillion times, so definitely don’t owe me anything. BUT, the other inside seam had gone in February just before the Northumberland Coastal marathon and I’d picked up a sewing kit at the hotel. It was a really nice tiny sewing kit so I’d put it in my first aid kit WHICH I WAS STILL CARRYING! Hooray, crisis averted!! How organized did I look whipping out a sewing kit and fixing my leggings in about a minute flat, at the side of the path while still wearing them!??

I was feeling good – much better than on my recce a few weeks before, and enjoyed the run off the island, getting the obligatory photo at the tidal refuge on the causeway. Having run the course recently I was able to remember the way across the fields towards the railway line. When I’d run it solo I’d used the special phone to check I could cross the rails, but on this occasion we were all sent on a parallel track to the south to reach a bridge to cross instead. The hill up from this and leaving the immediate vicinity of the coast suddenly made me realise how hot it was already, and the one thing I’d not trained for was heat. Or humidity.  Uh oh.

The first actual checkpoint was at Fenwick, as you try to cross the A1, about 10k in. Apparently the lead runners had arrived at the same time as a tractor with a long convoy of cars stuck behind it and they had to wait for ages while the cars went past, much to their disgust. I discovered that I’d already drunk a litre of my Active Root, and took the chance to take off my Tshirt, leaving just my Striders vest. The lovely marshals refilled my bladder and also sprayed me with sunblock (which I’d completely forgotten about) especially where the vest showed more skin than the Tshirt did.

On through Fenwick, then off road as we climbed to where St Oswald’s Way and the Northumberland Coastal Path continue south while SCW turns west. I’d got lost here on my recce, so made sure I caught the turning this time. Up and over the crest saw us bidding farewell to views of Lindisfarne, a detour around St Cuthbert’s cave (where strangely I achieved a Strava segment cup!??) , then over the fields and on to small roads towards Wooler. I knew there was a horrible sting in the tail before the checkpoint though, a HUGE steep hill, just when a road sign tells you that you’re 2 miles away.

The heat and humidity were really getting to me however. Despite being down to my running vest (first time!) I kept scanning the skies for signs of welcome cloud cover to no avail. I was definitely weaving over the road at one point, and a lot slower than I’d hoped. Another support crew gave me a 500ml bottle of water as my bladder was running out (and the kids gave me high-fives ) and that got me in to the Wooler check point at 30km.

But, I felt completely exhausted in the heat and the humidity. I’d drunk 3.5l of fluids, plus another couple of cups of water at the checkpoint, and I still felt dehydrated. Having done the recce, I knew that the next stage was across the Cheviots, with zero shelter, a lot of walking, and nowhere to get water for hours. I did not have the capacity to carry the amount of water that I would need, nor did I want to be so exposed and worried about water in the heat. I did the maths (I’m a professional statistician!) and decided to pull out before I was stretchered off a hill with heat stroke.

Part of me was gutted to end the last six months of training and preparation with a DNF at 30km, but this was always going to be me pushing myself to my limits even in good conditions, and these were NOT good conditions. One of the ultra training books that I had read spoke a lot about being able to make sensible decisions to deal with issues as they come up in long runs. I’m happy that I was able to evaluate the situation and come to a sensible decision before making myself really ill. It was so hot, and humid, and I’d trained for everything except the heat.  As it was, I had a couple of bits of sunburn in places the marshals had missed, and I hate to think what I’d have been like if I’d continued.

At the checkpoint we watched as someone else came in with full-blown heatstroke – she’d thought the sheep were talking to her and played “chicken” with a big lorry on the road in to Wooler. Fortunately she was with the sweepers, who kept her from getting hurt. Once she was in the cool, with a wet towel over her and some salt in her system she recovered. She told me she’d drunk so much water, a whole 1.4l, well under half of what I’d gone through. We gave her and her club colleague who’d retired before the checkpoint a lift back to Melrose.

Once back in Melrose rather earlier than anticipated, the heat and humidity just increased and there were large thunderstorms which I was very glad not to be out running in. I later learned that a Strava friend who is a much better runner than me had DNF’d at the next main checkpoint at 66km at about 11 hours. At least two people were hospitalized, and an ambulance was called for the winner after he crossed the finishing line. Of the 95 starters only 55 finished. It did mean saying goodbye to 4 UTMB points and any hope of competing for the Long Distance Strider competition, but it was epic.

I’ve been asked what I would have done differently, but to be honest, I was happy with my preparations. I’d trained well, various marathons and 50ks under my belt on similar terrain, I’d recce’d the course so I knew what to expect (including the heart-breaking hills before the main checkpoints) and I had the nutrition, hydration etc, nailed. In cooler conditions I would have had a good chance of finishing, but these were exceptional conditions and I’m happy that I was able to make the decision to withdraw when I did. I’ve only been running for 2.5 years, so even getting to the start line of a race with live trackers felt like an awesome achievement.

I think I’ll try to do a couple of 12-hour or 24-hour events before attempting this again, realistically that’ll be 2021 as my race calendar is full to the end of the year. Maybe I’ll marshal next year, or maybe try the 45 mile version. I have a better idea of what I need to do to succeed anyway. And I do like 50k runs, so maybe I’ll not try this again. I’m not ruling it out, but the magnitude of the task has become apparent!

For anyone thinking about it – it is a fabulous run – mainly on trail and some quiet roads. It’s not too hilly, apart from “heart-break hill” as you approach Wooler (30km checkpoint), and then Wideopen Hill between Kirk Yetholm and Morebattle (66km checkpoint). You can do it in two days by staying overnight in Kirk Yetholm – the Border Hotel at the end of the Pennine Way is great. You follow the route of the Roman road, Dere Street, for a good part of it, then a lovely flat bit by the Tweed before the final hurdle of getting over the Eildon Hills and descending into Melrose. Someone assured me it was all “runnable”, but I think he has different ideas about what is “runnable” to me. On the recce I found the paths much narrower and more technical than I’d expected. My recce also ended ignominiously at the top of Dere Street as fatigue and a tree root combined to bring me down, resulting in a suspected broken nose and very scary looking black eyes for a week or so. 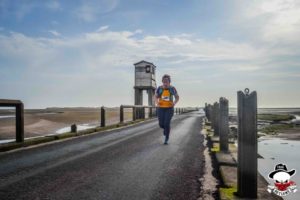