Elsecar – you can see what Barry Hines saw in the place. But even the creator of Kes would struggle to create a narrative quite as entertaining as Stan’s Toffee Run. Looking for a run on the eve of my 45th birthday, a group of hardy Striders jumped in David Maloney’s silver machine and headed for just outside Barnsley. Maloney had just spent the week at Edinburgh Festival but wasn’t ready for the farce, comedy and slapstick, some of it involving a horse, on show in this 10th edition of the toffee run.

Setting off by the 18th century Newcomen Engine, around 200 people set off along the canal and myself, Bill Brown and Mr Maloney took our usual place in the centre of the field. After a long stretch on the road, David remarked that this wasn’t the trail run we’d been expecting.  Suddenly around 100 runners came towards us as if they’d been asked to form a government of national unity or there was a gunman in the woods. Turns out they’d all missed an unmarshalled turn into the woods.

This put young William Brown in a rare position as first Strider. He spent the next 400 metres composing the race report in his head but sadly it was not to be. A yomp through three fields was cut short by the presence of four foals in the final third.

Andrew Horse Whisperer Woffindin decided to bravely try out the skills he’s learned on the terraces/nightclubs to charm these ladies, sacrificing his own promising position. Unfortunately, completely against his usual form, he only succeeded in making the beasts even angrier. For the second time, we were stopped in our tracks.

This equine fracas did do something to restore the natural order of things position wise with the hapless Brown, 37, stranded post horse. Not the first time he’s had a setback with the horses.

The last two miles played out in less spectacular but no less incredulous fashion with a run up to Wentworth into the blazing sunset. All competitors were treated to complimentary bag of toffees, ales at the Market Tavern and a pool table buffet. All in all a fantastic way to wave goodbye to 44. I’ve never laughed so much in a race and Woff’s rodeo is rolling into Owlerton early in the new year. 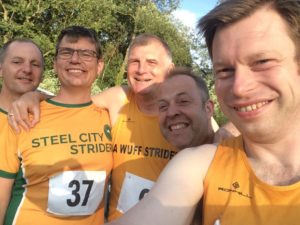