Family commitments meant that I had to miss Cusworth 10k and the points opportunity that it offered but luck and coincidence meant that I could enter the Stowmarket half marathon (I had no idea it was a thing). It’s 3 miles from my parents’ house where I was staying for the weekend and crucially, it was in Suffolk which is famously flat! I could hear a PB calling so I paid my £16 (that wouldn’t get you to The Norfolk Arms in the Sheffield half so a definite bargain!) and was looking forward to it. The run up to the race included 3 night shifts, a long trip to Suffolk due to torrential rain and roadworks, a day at Ipswich hospital with various relatives, a heavy night of drinking and one early night. Not surprisingly I was shattered on Sunday morning but the race didn’t start until 11am so plenty of time to wake up. The rain held off and I hung around waiting to start answering the many calls of ‘you’re a long way from home’, they are a friendly bunch round there. Then a voice beside me said ‘I recognise that shirt’, it was fellow strider Richard Eastall! We’ve never met but had a good chat as you do while we waited for the start. 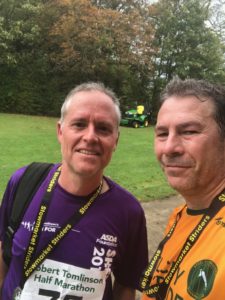 They had chip timing but annoyingly it was only for the finish line, add to this the fact that my watch decided it was a good time to ask me to log in to my Strava account on my phone (which was in my bag at the bag drop) meant that I had to set off without knowing my pace. There were pacers but due (I assume) to the small numbers they all started at the back. I had passed the 6 mile mark before the 1:45 pacer passed me, I was hoping for a sub 1:53 to beat my Leicestershire time so this seemed possible. Unfortunately it all went wrong from there, Richard passed me soon after and at 10 miles my legs were tightening up and I saw the 1.58 pacer disappearing into the distance. I pushed on through to the end but only managed 2:00.25, a disappointing time but it was a really enjoyable race. Not as flat as expected (similar climb to Sheffield 10k) and run on open, very narrow roads. The rain held off for the duration of the run (only to return on the journey home) and we were rewarded with a medal and a flapjack at the finish line. It was a well organised race with a local friendly feel and quite a bit of support considering how rural it was. I would definitely run this again but maybe I’ll be more prepared next time.

The first male was Neil Pollard running for Newmarket Joggers with a time of 1.14.46 and the first female to cross the line was Emilie Wix running for Woodbridge Shufflers running club with a time of 1.33.36. Richard Eastall completed the race in 1.55.21, my time was 2.00.25 and there were 209 finishers.