This was the third race in the inaugural Strider’s Trail Championship with 39 Strider’s daring to cross the border into Rotherham for this well established fixture in the summer (!) calendar. With over a hundred Strider’s at the first race, Sider With Rosie, and fifty plus at Agden, Strider numbers were down which may have been due to the weather which was somewhat diluvian.

So, what is trail racing? Described as an introduction to fell racing, it might also be viewed as ‘summer cross country’ with the change in gradient and conditions turning it into a type of fartlek and excellent relief from your usual midweek diet of long repetitions or hills.

There were podium finishes for Striders with Caroline Brock and Ben Jones both finishing second and dipping into Pat Rooney’s supply of chocolate’s and wine at the soggy post race chip butty fest at the Green Dragon. The field was led home by Zanthe Wray (Dark Peak) and Paul Johnson (Barnsley Harriers). Link is to the results on runbritain, 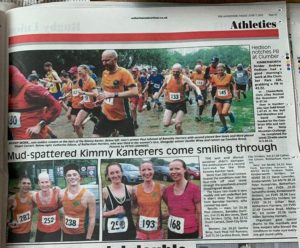 Race Report from the Rotherham Advertiser. Why aren’t more local races reported in the Sheffield Star?