My education took an interesting turn this weekend as I learned about the delights of Comic Con.*
It’s so big and popular that it ousted the established Telford 10K from its race HQ at the International Centre and caused huge traffic build up everywhere within the area.

I learned it was going to be a busy weekend in Telford when I tried to book a room for the night before the race. Like the nativity story says, there was no room at any inn so I ended up at a delightful little pub in Broseley near Ironbridge. I recommend the Lion Hotel not because it is particularly salubrious but the belly busting breakfast on race morning probably helped wipe a good minute off my race time.

England Athletics organises an annual 10K road race and offers 3 qualifying races in different parts of the country. The first was in Salford in September, Telford was the second and the third will be early 2020 in Chichester. From those qualifiers teams to represent the Home Nations will be chosen to run in Bristol next May.

As the only Strider at a race of nearly 1200 people I felt a bit lonely and was glad to see a familiar Dark Peak vest and Paul Fauset running for a qualifying time. I managed to see Paul run the elite men’s race before reluctantly removing my warm clothing as the wind whipped around the town bringing the occasional squall of rain with it. A lengthy warm up became a necessity as I shivered and tried to shelter from the wind.

The race is split into three parts; elite men running under 40 mins first, elite women and then my category, ‘The Masses’, over 40 minutes last. Paul ran a hard fought race to achieve a creditable 34:21, within the England Athletics qualifying time of 35:45. it gave him 8th M45 which gives some idea of the calibre of the competitors in the race. I had a much easier task as an F65. My qualifying time was 57:30 which I knew I was capable of though had no idea what my opposition would be on the day, despite a sneaky look at the start list and their positions on Run Britain Rankings.

I am trying to learn to run more even splits, taking the first part of the race steady and building up to finish strong. It had worked well at Percy Pud the previous week, mile one in 7.28 and building to mile 6 in 7.08, giving me the coveted negative split so I started with the same plan. 7.30mmp would bring me in somewhere between 45 and 46 minutes. The course starts with a descent from the Intertnational Centre through Town Park to a lake, very scenic for a road run. It levels onto a wide path similar to the Monsal Trail and turns at a cone just like Percy Pud but then repeats the circuit so the cone has to be negotiated twice. It is a very popular race because there is so little elevation in it. My first three miles went well so I allowed myself a bit of slack, reduced the speed and heart rate for miles 4 and 5 and then built up for a 7:14mmp in the last mile. I had run a decent race to finish in 46:46 as first F65 a good two minutes ahead of my nearest rival and well within the England qualifying time. Job done. it was good to have lots of spectators urging us on at various stages in the race.

So what on earth is Comic Con* all about? Are you a fan of dressing up as a comic book character and parading around as a Dalek or Buffy the Vampire Slayer or a host of other characters some more scary than others and a surfeit of stage blood liberally used? Well Telford might just be the place for you, but let’s hope it doesn’t coincide with an important England qualifying race next time.

The race was won by Adam Craig of Inverclyde in 28:32, just ahead of Omar Ahmed who took the course record at Percy Pud the week before.
The first woman was Samantha Harrison of Notts AC in 32:31. 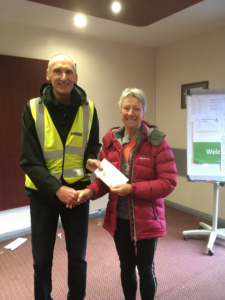