When our friends, Helen and Chris, announced their move to Canada nearly 8 years ago we were amongst the first to say that we would visit.  Time passed and we still hadn’t got around to it although we met up fairly regularly and Helen and I did the Big Berlin 25 together two years ago and would trot up Porter Clough for old times’ sake whenever she returned to Sheffield. So, when they announced that they were again doing the Banff Jasper Relay this year we decided it was really time to get ourselves over there and coordinate our visit with the Relay so that we could support them through the race.

The Relay was first run in 1980, stopped in 2000, and revived in 2005 to raise funds for The Brain Tumour Foundation after two local runners developed tumours and died. It is always run on the first Saturday in June.  The 260 kilometer route is divided between two stages which start at the same time.  The first stage sets off just north of Banff and consists of 6 legs along the Bow Valley Parkway, and the second stage of 9 legs starts at the Saskatchawan Crossing along the Icefields Parkway ending at the Community Centre in Jasper. The legs are of broadly similar length, give or take a few kilometers, but of varying difficulty according to the terrain covered.  Consequently, each team consists (or should consist) of 15 runners and there is capacity for a maximum of 60 teams.  The idea is that the runners tag each other at change over, but there is a cut-off time after which the next leg runners will start in any event. The run is along the hard shoulders of Highway 1a and 93 towards oncoming traffic.  The elevation is between 3977’ and 4670’.

Now, when I said that we were going over to support our friends, I did harbour a secret hope that I might get to run a leg. We arrived at our friends’ house in Edmonton and Helen said that if I went to her running group with her that night their team leader would be able to tell me if anyone had dropped out.  I was assured that whilst no one was needed at that moment, there was no doubt that there would be teams who needed me and so I was sent the link to complete the entry form which was accompanied by a massive waiver document requiring one to promise not to approach any bears one might encounter! I then carefully read the almost 40 page instruction and rule manual which also featured a frightening number of references to bears.

The day came to travel to Lake Louise where we were staying for the night preceding the race.  Yet again I was assured that something would undoubtedly crop up but, when by 10.00pm nothing had come through, I accepted that it was not to be. The next day we had a leisurely breakfast and went to look at stunning Lake Louise before setting off to find our friends on their respective legs. The day had started cool but by the time we caught up with Chris who was running Leg 10 along the Columbia Icefield the temperature had rocketed and he was dripping.  Having reassured us that he was okay we went on to find Helen at the start of Leg 11. Now my friend, Helen, is one of the chattiest people you will ever meet, and she had happened to be chatting to one of the race organisers who told her that Team 660 needed someone to run Leg 13 if I wanted to do it. Did I want to do it? Well, given the references to bears and the now searing heat, I wasn’t so sure, but my husband had now got the bit between his teeth and was determined that I should fulfil my ambition and drove us to the start of Leg 12 to meet the 660 runner for that leg in the hope that person had the required race number or at least knew where it was.  I spoke to one of the race officials and explained my position. “Oh”, he said, “There is a bit of an issue with Leg 13. I really can’t tell you what is happening about Leg 13. You see, there’s a bear.”  Oh no! Leg 13, bears, a temperature now of 26 degrees – none of this boded at all well.  As I wasn’t in my running gear, I thought I could just walk away and later explain that we couldn’t make contact with the team – which would have been the truth had my husband not at that very moment spotted a woman wearing a 660 vest arriving just in time for the forced start of Leg 12. She was called Celeste and said that her team were all-inclusive and it did not matter how fast or slow I was and the race number was in the support car which should not be far behind. Celeste was accompanied by her husband, Graham, who went off in search of the support car whilst I quickly got changed.  We needed to have the number in time to drive the 14.4 kilometers to get to the forced start of Leg 13 in 20 minutes time.  I quickly snatched the high viz and number after quickly being introduced to the couple’s gorgeous baby and both sets of grandparents who had come along to support. The journey was stressful because of the number of support cars dawdling along the road.  This took my mind off the fact that I had not drunk enough for such a hot day, did not have a lot of water with me – and the bears!

I arrived at the start of Leg 13 four minutes before the forced start time and quickly identified myself to the marshals and scrounged water off them. Then we were off! All thought of bears went out of my head as I then focused on combatting the heat and not wanting to let down the team of complete strangers who had trusted me with a leg of their race. If you have never visited the Rockies it is difficult to describe the scale of the landscape. Majestic just about does it.  Although my leg was ‘easy’ and only 14 kilometers I was alarmed to see the road stretch apparently endlessly before me. Worse, there was no GPS and although I knew the time, I was really worried that my usual slow pace would take a dive in the heat.  As I was revving myself up into full panic a vehicle drew up and a mellow Canadian voice called out: ‘Nicole, this is your support vehicle.’ I looked round to see if anyone else acknowledged the voice, but they didn’t appear to so I thought ‘that must be me’ but didn’t know what it meant.  A mile later a lovely lady was standing at the road side with iced water – for me! I took it off her not realizing that a mile later she would be there again! And every mile after that, so I no longer had to carry my bottle of water in my bum bag or stress that I had forgotten my energy gels as it turned out she had those too.  I shall forever be grateful to that woman for placing herself in the heat and at risk of bears for my benefit.  At 12 kilometers GPS clicked in for a moment so I knew that despite the road still appearing to go on forever the end was just around a bend.

The teams for the Relay had the kind of whacky names that you might expect: Drinkers with a Running Problem, We Got the Runs, Dead on Arrival etc. so it occurred to me I ought to enquire what my team name was. It was Where the Wild Things Run – after the Maurice Sendak children’s book, which was lovely. They were from Calgary and it was their first attempt at the race.  I ended my leg too late to tag the next runner before the forced start of the next leg but did meet some other members of the team who told me that the plan had been for one of the runners of an earlier leg to do Leg 13 but that they would not have got there in time, so they were as pleased that I could run as I was grateful to them that they had given me the opportunity.

I ran my leg in 1 hour 25 minutes and 41 seconds placing me 14th, the fastest time being that of the 6060 Chuggers at 1 hour 6 minutes and 41 seconds. There were 43 competing teams. Where the Wild Things Run came in 29thplace in 26 hours 28 minutes and 17 seconds. The overall winning team with a time of 19 hours 47 minutes and 43 seconds was U of S Jog Squad 4: On Stranger Strides. The first of only two all female teams was the Female Hinton Chicks that Kick in 22 hours 34 minutes and 6 seconds.  All other teams were mixed.

After the race there was Spaghetti Bolognese and prize giving in the Community Centre.  Where the Wild Things Run tracked me down to make sure I got in their team photo.  Such lovely people.

Although I complain about the heat, a couple of days later we were driving back down the same road in horizontal sleet and 4 degrees C, reminding me that mountain weather is fickle and things could have been far, far worse.  But would I do it again? What are you doing on Saturday 6thJune 2020 – I just need 14 of you and a support team! 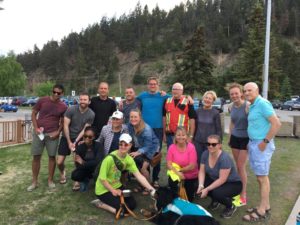 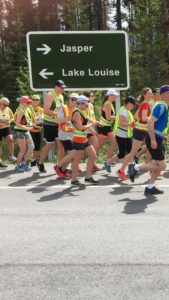 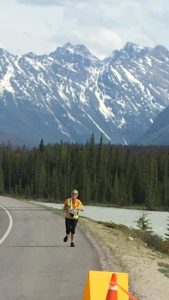 Looking as hot and bothered as I felt. 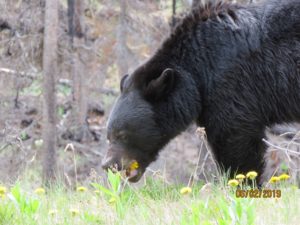 PS There really were bears!