Too Flat, Too Furious

The-race-formerly-known-as The New York Mini-Marathon, but now reverted to its née, ‘The Canal Race’, part of the 12-race KMR series that includes Kimmy Kanter, Butchers Dog Leg, and coming soon – Santa’s Special. (I agree with that title – I think Santa is pretty special.) 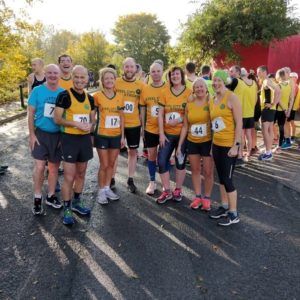 Like the Wickersley Chase at the end of September, this is a ‘low-key event, priced at just £5.00, entry on-the-day only, timed with a stopwatch and a clipboard, prizes of wine or chocolate, big buffet afterwards (unlike last year’s farrago), no mile-markers, anyone know where the finish line is?’ sort of a race. I have run it four times now, and never started or finished at the same place two years running. And that’s the attraction, really. The race itself is utterly simple – start beside the New York Stadium, next to the River Don / Sheffield and South Yorkshire Navigation Canal, and head towards Tinsley Viaduct along the towpath. As the profile is flat (0.16% average gradient, gaining just 11m in 8.57km) runners set off far too fast and then desperately try to cling on for the rest of the run. After dodging a mahoosive puddle and being nudged into a bollard (favourite running word of warning) I was already 35m behind my target. I failed to catch up, but did claw back a good few places as we went. 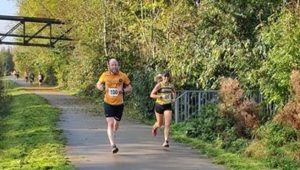 Points of interest along the way include RSCA (Rotherham and Sheffield Canal Association) pier, Blackburn Meadows Nature Reserve, a section of the SWR Leg 1, Halfpenny Bridge, a traffic cone in the middle of the path to turn around at halfway, four sets of traditional canal lock gates, and the beginnings of Rotherham’s riverside regeneration on Forge Island. Might it become the new Kelham Island, I wonder?

By halfway to halfway I was having to work hard to maintain the pace I was at, and from chat with others later they were doing the same; ‘Gone out too fast (a relative term) and fighting to keep it going,’ and, ‘horrid’. At least it was relatively downhill on the way back, if unnoticeably so. The twist and turn through barriers at the last lock, by Centenary Riverside Nature Reserve, was the hardest point as we had to get serious with ourselves to pick up the pace again. 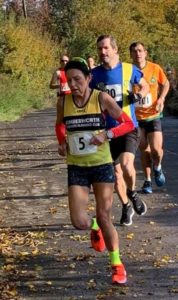 The finish line was not where we had expected it to be and cost us all race pb’s. The latest revised route extended along the riverside path a little, to finish just short of the railway station. Quite a nice finish area, giving easy access to the Bridge Hotel, scene of the post-race buffet and Kimberworth Striders’ London Marathon Ballot draw for their one Club place, but about 600m further than last year. Jo had stopped and stopped her watch before realising the finish line wasn’t quite as informal as she thought!  Link to Jo’s report here.

Amy Housley should be able to rest easy based on my form in this race: averaging 4:37 per kilometre suggests a 23:05 parkrun at Castle in Round 2 of the 2019 parkrun Cup next Saturday, one and half minutes outside my handicap. She could go round at 25:27 (four whole minutes outside her previous best at Castle) and still float through to Round 3.

For a fiver you get a real race – fast, flat and furious, a bottle of water or two, a buffet in the local where half the staff were dressed ready for a Hen Do (one with her scoop-neck top on back to front!), points in the KMR series, five miles in our own LDS standings, and to hear about Tony’s new ‘trainees’. Well worth the trip out and the entry fee.