‘The Fellsman is a high level traverse covering more than 60 miles over very hard rugged moorland. The event climbs over 11,000 feet in its path from Ingleton to Threshfield in the Yorkshire Dales.’

This was a long day of two halves, the first of which was wet and the second of which was dark. The terrain was boggy and tussocky, the weather diabolical- hammering rain and hail meant the visibility was poor for much of the day, I missed Betty my fell running dog and I couldn’t help but feel a little fed up for the first 7 hours or so.

But then, bang on mile 30, my day just turned around. It was still raining but I wasn’t cold, and all of a sudden I got the long sought after rush of the runners high and everything started looking really positive, even a bit emotional. The bountiful checkpoints were manned by eccentrics and clowns (actual clowns!) keeping everyone fuelled up on hot drinks, cakes, hot sausage rolls, beans and pasta to name a few, and the lonely tented clip points manned by loyal sentries camped out for hours in freezing bogs. Everyone was up for a laugh. All these wonderful volunteers made for such a good day. The organisation was impeccable, faultless. Who can let a little bit of rain spoil all this good effort?!

At night, runners are grouped into 4’s and rules state these groups must stay together until disbanded at the final short road section back to the finish. I hoped I would be grouped with people I could keep up with and more hopefully nobody as miserable as I had been earlier in the day! But I couldn’t have hoped for better than the three people I joined up with at the Cray checkpoint. I wanted to get in and out as fast as possible- I’ve always found busy checkpoints a bit noisy and overwhelming after being out on the open hill for hours! So I immediately joined a group of three runners who were about to set off. I rushed some dry layers on and off we went. What followed was the best part of the day. It turned out these three were local. Not only were they all thoroughly nice people, they knew every tussock, bog, wall, cairn, grain of gravel, the lot. Even in pitch black every line was perfect. All I had to do was follow their feet. The clouds had gone, the stars were out, spirits were high and it was an absolute privilege to run with them.

I finished in 17hrs, on a massive high with a big grin, feeling thoroughly well looked after and the proud owner of a finishers certificate along with the beautifully designed fellsman tally card. If anyone likes fell running or even fell hiking, do the fellsman. 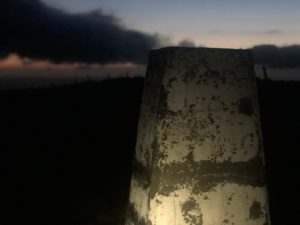