The Great North 10k, baby sibling to the Great North Run, is one of those mass participation events which you either love or hate. I must confess to hating the Great North Run. I decided that 2018, the third consecutive Great North Run I’d taken part in, would be my last. My times got slower with every successive event, despite being fitter and better prepared each year, and I think this was primarily down to people being rather over-optimistic with their predicted finish times, and treating the race as a fun-run rather than a fairly challenging half marathon, and therefore the starting waves, particularly among the more average/ slower runners like me, weren’t overly helpful in terms of flow. Eventually it felt like well over 13.1 miles of weaving and getting stuck in traffic, rather than a chance to get a PB (hardly surprising I suppose with there being well over 40,000 finishers, but frustrating nonetheless!). As I stood on the grass verge of a central reservation somewhere between Newcastle and South Shields, choking on a jelly baby and replacing my right Saucony where someone had trodden on my heel, I declared, between coughs “No more!”.

However, there is a lot about the Great North Run I like. In no particular order:

So, what I was after was all the good bits of the Great North Run, without all the bad bits. And lo! In my inbox landed an email selling the merits of the Great North 10k. Without further ado I realised that here was the solution: about a tenth of the number of runners; it still meant I could do all the eating/ socialising and Premier Inn-ing; AND I didn’t need to run anywhere near as far. Result! I was signed up in a flash (as was my unsuspecting and long-suffering husband).

I’ll skip the bits where we did all the eating, drinking, parkrunning, and bonus trip to the seaside on the Friday and Saturday, and take you, dear reader, to the Gateshead International Stadium on the Sunday morning. Parking was reasonably priced, well-organised and convenient. Portaloo queues were practically non-existent, at least when I paid my visit. Atmosphere was extremely friendly, and very much enhanced by the 200 or so Gurkhas from Catterick Garrison, who for the seventh year were using the event as part of their fitness training and to introduce them to the UK as part of their cultural orientation programme. They were all very enthusiastic and looked incredibly young…

Everything about this race was extremely slick. The tannoy system worked throughout the event village and right up to the start line. Timings went entirely to plan, and the starting waves worked impeccably (10:00am Gurkhas/Elites, fast paced club runners & Orange wave; 10:05am White wave (us); then a bit of a gap before the Green and Pink waves (10:25 and 10:30 respectively). Despite the course being narrow in places it never really got congested.

The course was mainly but not entirely out-and-back, undulating, and despite not perhaps being as “scenic” as the sales literature would have you believe, it was certainly interesting, passing as we did beneath the many iconic bridges of the Tyne and alongside various notable landmarks on the Quayside such as the Sage and the Baltic Centre. At one stage on this rather dull day we were inexplicably squirted by the hoses of a couple of teams of firefighters which was quite odd, and the final mile introduced us to the infamous “Slog on the Tyne”. The least said about that the better.

The race ended by doing half a lap of the stadium track itself which was a nice touch, and at the finish line the compere gave a shout out to us Steel City Striders, which was very welcome, as despite the fantastically friendly support along the entire route, the green and gold simply didn’t have the same impact as it does in Sheffield and its environs!

So, would I recommend the Great North 10k? Yes, if you like that sort of thing and don’t mind paying £25+ for a race entry. However, whilst this year the event took place the same day as the Leeds 10k (similar type of affair only nearer to Sheffield), next year it’s the same day as the Round Sheffield Run so I suspect I will wait to find out the outcome of the ballot for that before signing up the Great North 10k again!

There were 3,442 finishers. The race was won by James McKenzie (unattached) in 33:11. First lady home was Ashley Gibson of Tonbridge AC in 35:40. Unsurprisingly there weren’t huge numbers of Striders present (three to be precise): 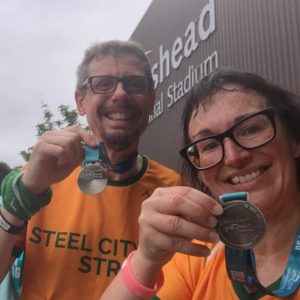