Another Grim Up North production had a wide selection of races for the Canal Summer Extravaganza. Mark Gray went out hard and tried his best to run a sub 3hr 30 mins 50k. Looking at the results, if he had stopped at the marathon distance he would have won the marathon. However, his report below explains what happened:

I like this photo of me at the 26 mile mark of the Grim Up North Leeds canal 32 mile race yesterday. Sadly this was my second race of the year and my second DNF. I went out hard, deliberately to see if I could run a sub 3 1/2 time for 50k. I was on track at 16 miles but knew I had nothing left, and the death march began from there. Managed to run past the marathon finish, which was hard, but I could give no more by 27.5 miles. Hopefully the first and last time I will DNF when leading a race, but I really couldn’t run a step further. A good lesson in knowing the limitations of my current fitness. No regrets as I had a good go – actually perhaps my only regret is not entering the marathon as I was well ahead of any marathon runners when I reached 26.2…. I did really enjoy the event. The Grim events are quite expensive races but really lovely atmosphere, very friendly and great set up at the end with beer, cider, BBQ, Strawberries and cream and countless cakes. Think I’ll be back for another of their races!

There were 8 finishers of the Ultra which was won by Dave Teggart of Bradford Airedale AC. The winner of the marathon was Keith Johnstone of South Leeds Lakers AC in 3.26.10. Mark finished the marathon distance in 3.11.56 after doing a 1hr 27 min half so kudos indeed to him. 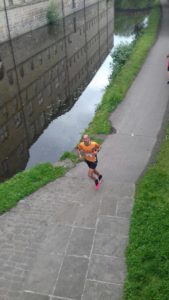