If ever there was a reason to ignore every weather forecast ever published, this was it. England v France, in the Rugby World Cup in France has been postponed because of an upcoming typhoon. If the Met Office has predicted the typhoon, it’s probably going to be sunny with a few scattered showers!!

The weather forecasts in the days preceeding the Ultra promised a rain apocalype and John and I were in regular contact with each other and I still haven’t worked out whether we were encouraging each other to bottle it or to man up and face the weather head on. Thankfully the BBC were a bit more optomistic about the weather than the Met Office so we decided to be brave and face the weather.

The Limestone Way is a 43 mile route from Ashbourne to Hope along footpaths, bridleways, some minor roads. It is a beautiful route and a run that I would highly recommend. The route passes through dramatic dales and beautiful Peakland villages all set within a green, gently rolling landscape. It is named after the white carboniferous limestone which is prevalent in the landscape in the southern part of the Peak Park.

This event is organised by Peak District Trail Running:Dark and White and I have to say the organisation was excellent. Over the 43 miles and 5413 feet of climb, there were 3 aid stations whereby drinks, gels, protein bars, fruit was readily available. The route was perfectly signposted therefore very little chance of getting lost

The weather generally stayed great for the most part. It threatened to rain at times and we did get hit by the occasional squally shower but the sun also shown for a reasonable proportion of the day – never listen to the weather forecast!!

The ultra was won in an unbelieveable record time of 5.45.20 by Matthew Orford of Lichfield RC. I think we worked out it was equivalent to a 3.30.00 marathon time, over the terrain we had to go over – amazing. The ladies record also went this year, to Charmaine Horsfall (unattached) in 7.34.24. 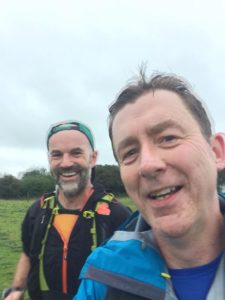 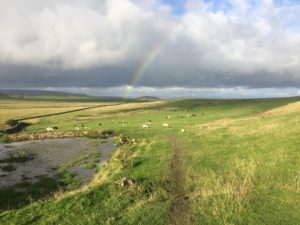