Race report by Will Day

This one popped up on my screen so I thought, why not. It’s a 10 mile trail race with 331m elevation through undulating countryside, fields, woods, Calke Abbey etc. Nothing too technical though.

Marshals were on the few road crossings but apart from that, it’s unmarked and is designed to test navigation skills. There were four self-dibbing checkpoints en-route.

Although I was the only Strider, there was a very friendly bunch of mainly club runners from the area.

Conditions were good – clear, no wind, a little chilly but I soon warmed up.  Ground was a bit dodgy in places – frozen ankle-testing mud in parts. Although not FRA, most of the kit was required due to the cold and navigation.

The start of the race was interesting:

The start is inside the village hall – In order to avoid a large bottleneck (approx. 120 runners) at the nearby gate, the assembled runners (in the hall) were asked to remove and hold their shoes. After the 3-2-1, we had to dart outside and put our shoes on there – this alternative to the one-lap-around the-field method appeared to work equally well.

I managed to add yet another type of running mishap to the list – I drew blood by dibbing my finger at CP4, idiot. Very happy with my 20th position.

Strongly recommended but get in quick as it sells out rapidly.

There’s a sister race – ‘Brooksie’s Bash’ in mid-July, same route but opposite direction.

The race was won by Robert Donald (Shelton Striders) in 1:06:07. First female was Pascale Holden, also of Shelton Striders, in 1:24:18. 114 runners completed the course. 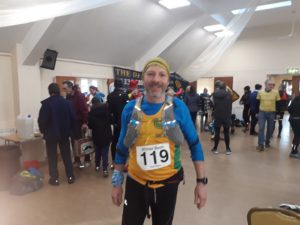