This isn’t going to be the floweriest of race reports. I imagine that the Tigger Tor race gives brilliant panoramic views over Hathersage, Sheffield and various moors. A lot of it’s run through an SSSI. There are apparently adders. I didn’t see adders. I mostly saw the feet of the person in front of me.

Tigger Tor is the first of Totley AC‘s six-race series. It’s a ten-mile (ish) BM-rated race with about 500m of climbing. There’s no fixed course but 11 checkpoints to be visited in order, and a “no roads except at the start and end” rule.

I turned up at Sheffield Tigers RUFC fairly early, with the thermometer showing a measly 1 Celsius and the wind buffetting away at the car. Registration included a strict kit check before you could get your number, which isn’t something I’ve encountered before. Number pinned on, I retreated inside the rugby club and saw a lot of friendly Striders faces. Eventually we were herded into the start pen, and off we went. Up the main road and onto Sheephill Road, and then we were turned loose onto the moor.

Having looked at the map, and not being familiar with Burbage Moor, I was a bit worried that there were no marked paths between checkpoints. Thankfully, it turned there were generally unmarked ones, and plenty of other runners ahead, so I set off after the crowd, up across the heather in the general direction of checkpoint 2. The mud wasn’t too bad at this point, though there were some very soggy patches. After a sharp descent and a river crossing, it was time for the first big climb of the day, up to Higger Tor. This was one of two landmarks in this race I’d already climbed in the Longshaw Sheepdog Trials race last year, and I didn’t recognise either of them at the time because I was trying not to fall over.

Down to a sharp left at Wynyard’s Nick and it was on to my least favourite bit of the race, a descent down a path covered in loose rock where I stumbled several times. I was glad when we started climbing again, a steep kick up to and double back from Carl Wark (as I was climbing, someone coming back down shouted “There’s a pot of gold at the top!” He’d have had more takers for a pot of tea.) The second half of the descent was a proper flyer, my fastest bit of the race, perhaps helped by having just seen how close behind me my work colleague Pippa Powell was. Nothing like Monday morning bragging rights to get the legs pumping.

It was soon time for another monster climb up the heather though, as we headed for Houndkirk Hill where the wind was almost enough to knock me off my feet and I realised just how hungry I was. If I hadn’t stopped for a gel just after the top, I think I’d have taken a tumble on the way down off the moor.

It wasn’t long before we were back at Sheephill Road, though, which contrary to what I’d been telling myself is nowhere near the finish. Instead, you have to turn left up the road, before a right at the top of Long Line and a long, straight, knee-jarring descent on tarmac. By the end of that I couldn’t manage to run up the banking to the rugby pitch, where at last the finish line and a brew were waiting.

As always with fell races, this was ace. Really hard work, really friendly atmosphere, great encouraging marshals and a chance to go pelting down a hill like an idiot. A great way to start the year.

For the umpteenth fell race I owe thanks to Bob Grocutt for being the Strider in front for most of this course. I definitely feel like it helps to have a friendly yellow vest to follow when the going’s getting tough.

(I realise that I haven’t mentioned the mud/marsh. There was a lot of mud and marsh, but I couldn’t tell you where. It was just kind of interspersed throughout, and there were few sections without at least one over-ankle moment.)

378 runners finished the course, of whom a magnificent 47 were Striders (including a brilliant third in the Senior Women’s category for Fran Cummins). The race was won by Steve Franklin of Totley AC in 1:11:50, with first female being Bethan Gay of Dark Peak Fell Runners in 1:28:11.

Full results can be found at: https://www.webscorer.com/racedetails?raceid=167684 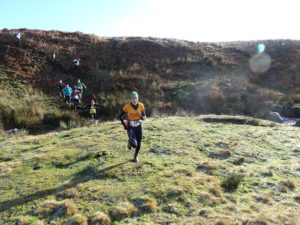