Totley Moor is the third race of the annual Totley AC fell race series. Clocking in at around 6.5 miles it starts with a long steady climb from the Cricketers Inn up to the Totley Moor trig point. From there the route heads over to Blackamoor and the second half of the race features a number of tricky climbs and descents on the rocky trails, before ending with the customary circuit of the cricket ground.

It was fine, sunny evening and there was a good turn out from Striders, including a number of Peter Brown’s training group, who opted to take advantage of coach’s absence and forego laps around Virgin Active in Heeley in favour of the trails.

The race was won by Harry Holmes (Matlock AC) in 43:41. First woman, and 13th overall, was Phillipa Williams (unattached) in 46:58. This meant Striders’ own perennial fell race winner Caroline Brock had to settle for an untypical second place. However, having seen the state of her heel after the race, she did well to finish, let alone place so highly. Philippa Rose was second FV40 and Nicola Rafferty first FV50 – well done. There were 260 finishers. Placings in the women’s only results in brackets.

Full results on Webscorer and the Totley AC website 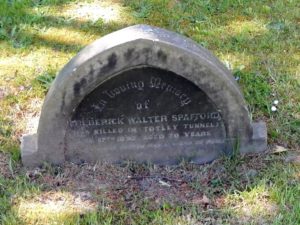 Some reputations were also killed on Totley Moor.