At around 6am, 3 striders rose from their pits to prepare for a journey across the pennines, upon awakening there was a shock as snow was falling from the sky which meant that possibly Tom Halloway’s PB attempt maybe in jeopardy. This did not to deter Tom who was as enthusiastic as ever heading out.

As the 3 striders set out on the long journey they experienced what most British people have come accustomed to – 4 seasons within an hour and half on the way to the Manchester United training ground.

Upon arrival the facilities were more than enough to accommodate avid runners. There were enough porta loos for everyone, a bag storage area as well as discounted running gear on sale. Electronic devices were used to get race numbers which made the process of collecting your race number quick and easy, the chip was built in, pins where provided and they even had pre punched holes as well so the number was on the striders jersey in no time.

The beginning of the race was tight, not much movement for the first 500 meters until runners spread out a bit, the course began flat however the terrain was full of holes and puddles  this however was short lived as it soon turned to road runners’ favourite surface, tarmac.

The course was very fast but the conditions were not on our side, High winds, puddles, rain and hail throughout. Despite this as it was a fast, mostly flat course all striders where going hell for leather in search of PBs. The course  was a loop, the scenery of countryside was very nice. There was one hill however not an issue for striders who are more than adapted to hills.

The field was stacked with sub 40 min runners, 240 to be exact. Amongst them being our own Mr Tom Halloway finishing the day with a PB of 34:20 an absolutely exceptional time, inspirational even, Sergei Shkul had a PB 41:17 and yours truly with a bench mark, technical PB of 41:10.

After the race water and an energy bar where provided, the only downside was T-shirts and medals being extras but who needs them when you have a PB 😊.

All in all it was a good day out and definitely recommended.

9/10 the 9 due to the added cost for medals and T-shirts.
The race was won by Bart Van Nunen (unaffiliated) in 29.26 and Laura Weightman of Morpeth Harriers & AC in 31.59
Striders results: 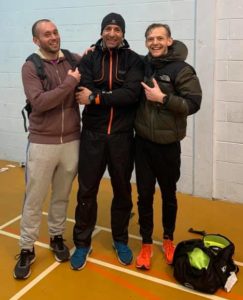