Another pleasant evening, but a little fresher than some of the previous ones which was welcome. Still yet to have any significant water or mud this year.

Noticeably quieter too with people on their holidays. 277 senior runners (compared with 522 for the first one of the season).

Tom Saville was absent so someone else could win this time, and Alan Ford of Barnsley AC duly obliged in 26.09. Speedy strider Ben Jones was a mere minute behind in fourth.

Our own Charlie Narozanska was first lady home was in 31.32, surely sealing the VF40 series prize for the second year?

For my own part, I was pleased to find my two closest rivals for the VM50 series prize absent, so it is now mine to lose…

There were some debutantes amongst the striders including Kevin Sibley (who finished annoyingly strongly) and Chris Smith. There were also sightings of some rather more inured truncers such as the Gold Star and Paul Stuart (who seemed to appear from nowhere). No less than ten striders managed PBs on this occasion. Well done all. 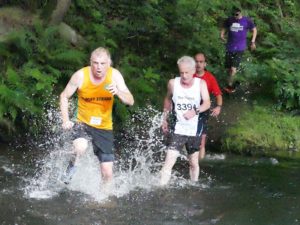 Float like a butterfly, sting like a bee. Don’t mess with the Wuff, en route to a big PB. (thanks to Trunce photos)