This was the 76 km version of the Tryavna Ultra. Tryavna is a small town in the hills of northern Bulgaria, in the Balkan Mountains (Stara Planina in Bulgarian). It was organised by irun.bg. I found out about the race from the website www.worldsmarathons.com .

Why go to Bulgaria for a marathon? I like travelling to new locations and I hadn’t visited Bulgaria before. As it turned out, Bulgaria has stunning scenery and there are some really challenging and well-organised races out there.

I had booked myself into a small hotel about 5 km outside of the town of Tryavna itself. I seemed to be the only guest most of the time. The two star hotel only cost £15 per night and I discovered that Bulgaria is a really cheap destination. We are talking under £10 for a main meal plus beer in a restaurant. I drove to Bulgaria and stopped off in Hungary and Serbia on the way. Yes, it’s a very long drive, 1800 miles to be precise. My trip involved a week in Hungary where I used to live about ten years ago, a trip to Slovakia and a short stay in Serbia and Romania (from where I am writing this report).

The 76 km version started at 6am. Tracking was available online courtesy of www.race-tracking.com . As the name suggests, the Balkan Mountains are hilly. The race route was circular and rose from 440 m to a maximum of 1460 m. 146 started the 76 km race with 95 starting the 141 km version at 5pm the day before and 198 starting the 42km race as well as 225 starting the 23 km race so that’s a lot of runners.

The route took us through steep forested slopes mostly along forest tracks. These for the most part were heavily eroded and deep gullies were present along many of them, making running quite hazardous. In addition, much of the tracks are covered in rocks of various sizes. The route passed through several small villages, which was where the aid stations were placed mostly. These were very well stocked with isotonic drink and all kinds of food.

I did find some English speakers to chat to. The runners were mostly Bulgarian but included Romanians, Serbs, Turks and a few Brits and other nationalities. The route was very well marked with red and white tape and there was no chance of going wrong.

By far the hardest part of the race was a steep 850 m climb over a distance of only 6.5 km which literally left me shattered. I was so done in by the 49 km aid station just after this climb that I seriously considered packing it in. However, after debating with myself and downing plenty of refreshment, I felt better and continued. I had serious difficulty running downhill by this point which was a shame because there was quite a bit of runnable downhill to go. I could not trust my legs not to land me flat on my face, so I did a lot of walking, especially after the 56 km point. I had already had a fall and had injured my knee but not seriously.

By this time, I had noticed a blister on my right foot due to the fact that my entire foot had disappeared in the mud earlier and my sock had got wet. I was concerned that it would get worse but it was taped up at km 56 and on I went.

The hill climbs never seemed to end. Fortunately though, it was not too hot (about 26 C and mostly overcast) nevertheless, I drank copious amounts of fluid during the race and I had noticed that I was not urinating much to be blunt. I really suffered on this race and wish that I had used isotonic drink during the race in my pack instead of just at aid stations.

I finished in 14:25:45, 117th out of 146 starters within the 16 hour cut-off. When I finally finished, a couple of cold beers felt so good. The event finish was right outside the town hall and it was a very festive atmosphere. I had the post-race shivers so I did not hang around too long. Of course I would like to do it again but will be better prepared next time.

All results are here and an interactive map here 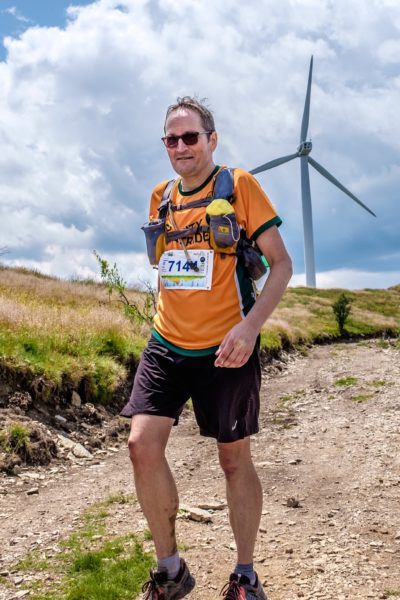 Alan, not tilting too much