Report by Will Day

‘Per favour toilettes!’ I tried to politely shout as I darted into an Oriago kebab house at about 15km. This wasn’t part of my alleged ‘running plan’. It’s a weird thing to find yourself having one or two problems in a toilet cubicle whilst being in the middle of a marathon; normally most people would normally take their time, ensuring they leave the place as they found it with a degree of personal hygiene etc. Slight panic set in as the supply of take-away standard issue bog paper (akin to tracing paper thickness) was minimal and I was in a sodding marathon. It all felt a bit surreal.

I’m not going to go into any further detail on this set back, nor will I describe the state of the cubicle afterwards suffice to say I did my best in the time available.

Hurriedly I ran back out to join the race, thanking the proprietors, hoping my troubles were over.

This however wasn’t my first such issue. It had started earlier, about half an hour before the start in a portaloo; the ones with a foot pump flush. On this occasion, I achieved my daily required steps target by using this flush, my Garmin buzzing excitedly to inform me of reaching my target – evviva!

So, on to the race. I was supposed to be pacing my ‘significant other’ (Georgina) who had, six months earlier and rather foolishly, bowed to my persistent pressure and agreed to do a marathon; the deal being: she chooses which one, I help her with her training and I pace her throughout.

She’s not daft is our Georgina; not content with the range of UK marathons on offer, she chose Venice. The training went well, and she was all fired up for it only for us both too succumb to flu-like nonsense during the previous week. Although I seemed to get over it reasonably ok, she continued to suffer and quite rightly, made the hard decision to not do it. I’m putting the word DISAPPOINTMENT in capital letters. I’ve never known her be ill so that was incredibly bad luck for her. I’m still amazed that she coped with the 10k alternative on the day – that wasn’t easy as she still wasn’t at all well.

Absolutely spot on – a linear flat route starting inland at the beautiful Villa Pisani near Stra, along the riverside, through pretty towns with amazing support. Think Tour de France type festivities, bunting, numerous bands and celebrations. Absolutely fantastic. After the mainland, onto the dauntingly long and straight Ponte della Liberta (4km ish) to the islands of Venice, round the side, along the waterfront, into St Mark’s Square and a little bit further to the finish in time for tea and medals. What’s not to like?

Back to the race

So, I found myself at the start of the race, unexpectedly having to give it my best. I was quite fired up having met Tracy Biney of the Striders and her pal Nicole, both exuding confidence, happiness and looking like proper runners. I stupidly thought I’d attempt to adopt those characteristics and assumed I too could perform like a true athlete.

The sun was shining and an air of Italian adventure was prevalent – Bellissimo!

It all started well – a good pace for a while. Then the issues ‘down under’ began. There was a distinct lack of WCs en-route. I inspected roadside ditches, but nothing would provide sufficient cover to protect my modesty.

I remembered the old adage, ‘Never trust a fart’ which, I must admit, was a challenge to follow on this occasion.

The afore mentioned take away in Oriago gave me a brief and entirely necessary sanctuary.

After that, I was back on it but at 25 km, the heat (22 C) got to me and my muscles were seizing up. I swore I’d never do another marathon. Another phrase came to mind, ‘If you think you’re beaten, then you are’. This just managed to carry me onwards.

Tracy and Nicole glided past with seemingly effortless grace and smiles. How?

On the never-ending bridge, I encountered the zombie apocalypse; numerous runners who had stopped or staggering – a scene from hell.

To cut a long story short, I shuffled the final 17k – the circuit of St Mark’s Square made it worthwhile; crowds 5 deep and magnificent buildings all around.

I almost fell over the finish and, shortly afterwards saw Tracy and Nicole still looking happy, confident and like proper athletes.

Now why do we do these things? Why do I now want to do another marathon?

A decent marathon performance is still unfinished business for me and I’m looking for my next one.

There are so many variables that apply especially to marathon running which can affect the experience and result: weather, training/prep, what you ate the night before, attitude on race day equipment etc. I had a few against me sadly on this one.

Despite all this, I’d strongly recommend the Venice Marathon – great route!

Mention must also go to our very own Venetian Strider, Valeria Gasparini (she’d run these one three times previously); massive credit to her for trying – she too was very unwell at an early part of the race and sadly withdrew. 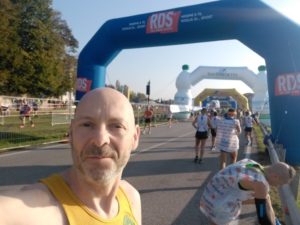 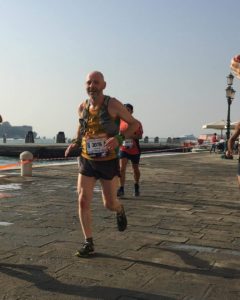 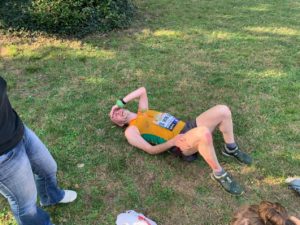