An 8K woodland trail loop which was anything but flat was the Goldstar’s latest creation. This race was the first in the Striders’ Trail Race Championship and the opening event in the Striders’ Triple Crown. Huge kudos to Andy for setting up this event (and all his other innovations!) – his post event facebook post is reproduced below:

“Thank you so much to all who made last night’s inaugural Strider Trail race a massive success!

At 5.45 when there were 8 of us struggling to put up the Gazebo due to the strong wind, I had visions of about only 3 runners turning up.

However,the fact that over 130 of you came along to support this race, meant the initial worries completely unfounded and was really appreciated.

We had an incredible team of volunteers to put this event on.

These people all went out of their way to enable the race to go ahead. They turned up to help set up the course in the rain and provided encouragement throughout. And did everything positively. A real joy to work alongside. A very proud day to be a Strider.

After the success yesterday, this event will be promoted to other running clubs next year. I will probably tinker with the course a little, but essentially be as flat and easy as yesterday’s route.

I’m sorry many of you did not receive a medal. I pessimistically only ordered 75. However, I’ve ordered 50 more and will bring them to club events over the next couple of weeks, starting at Hillsborough Parkrun Sat 4th May.

In total, you raised a substantial £650 for Calla Lily Kate’s Uganda Appeal.

Thanks again to all marshals, photographers, runners and spectators.”

Results – the vast majority of runners were striders. All results are shown below including those runners representing other clubs: 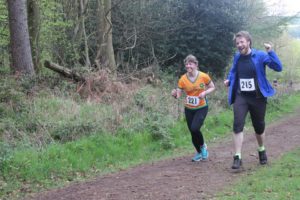