Race Date: Sunday 28 April 2019
Set in picturesque Thoresby Park, not far from Clumber Park which will be well known by those who have run the Worksop Half, the race is mainly on trails but also with some road sections. With 5k, 10k, half marathon, plus full marathon also available, as usual Nick Booker went for the longer distance. The leaders set off at 6:30 mile pace which Nick considered too quick so decided to let them go after four miles. Struggling at 20k, the Missus told him to “get going you pussy”, so it was time to take stock, do some recovery and take on fluids. At 40k, when marathoners are desperate for the finish, Nick decided to up the pace and by the finish had passed all but the leader ending in second place in 5hrs 10 minutes, 2 minutes down on the eventual winner Simon Sleeney. If only the race had been another 10k longer Nick complained proving that ultra runners are normal after all and suffer from the same feelings as other athletes where the finish line comes too quickly.

Organised by sbrevents can you spot the deliberate mistake but also look at that last lap sbrevents results  First woman was Nikki Cameron-Williams, Holepierrepoint RC who had a top ten finish. This shouldn’t come as a surprise as women are more likely than men to finish the ultras that they enter as they tend to have better pace judgement, i.e. don’t have the macho instinct to charge off at a suicidal pace, shorter legs which means better cadence and therefore are more efficient and also metabolise fats better which is what you need when the carbs have all gone. 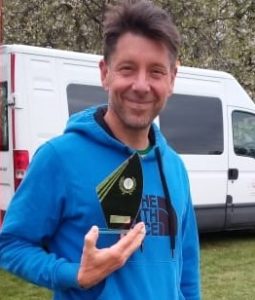 Another trophy for the already groaning cabinet