Firstly let me just say I entered this event as I was a little p****d off that I didn’t manage the 100 miles on the Humber Bridge earlier this year!!!

I entered this race without doing my homework and researching the event first, but I’d been messaging the king of daft long distance, Mr Nick Booker, and he thought I was competent enough to finish and said it was one of his favourite runs. “Do I?” I thought, hell why not enter it before the price increases.

So Saturday morning arrived and my alarm went off at 5am. I got up, had my huge bowl of porridge and banana, cooked my jacket potatoes, got my ham sandwiches ready, and wrapped my chicken I’d cooked the day previously. My clothes were all ready, along with my watches, plasters and tissues. We set off to Huddersfield and arrived at Salendine Nook scout hut with loads of time to spare. I checked in and had my tracker fitted to my bag but unfortunately the time was running out quickly as, for all the people that had entered, there were only 2 portable toilets.

We all gathered down the hill at the start line and we set off a few minutes later than planned but we were finally off.  The weather was in our favour too as it was dry, but with all the rain the day before it was going to be a wet, muddy 100 miles so I had trail shoes on.  There were so many people making it a slow start as the 30 mile, 60 mile and the 100 mile ultras all began together.

Off down the lane we went past a row of cottages (good support there) and up towards a few farms, before heading down a short muddy snicket and off into the woods, over a bridge, up some slippery cobbles, past the golf course and up again until you came out onto the road and then it was up and down for quite a long time.  A lot of the first 11 miles is road/footpath running, then at 11 miles you hit the first aid station which is a few water butts on a table and you head off uphill again, or what seems uphill, but was nothing in comparison with what was still to come.
Further along the path, as you head towards Marsden, you come across one of the arrows pointing upwards and as you turn the corner, you’re greeted with a hill that Sheffield has no comparison to. It starts off as tarmac but quickly shifts to mud, rocks and moss and just goes up and up; eventually you start to descend again before the course smacks you in the face and sends you back uphill towards the start of the reservoirs of which there are 3. At this point you meet the manned aid station and there is plenty of choice on the table to choose from.
Eventually you come out back onto tarmac and aid station number 3, another manned station, but this time it’s just water on offer.  You set off along and down the road before cutting across and back towards the mud and cows to greet you in a field. This is quite a long off road section through numerous fields, eventually ending back on tarmac for another few flat/undulating miles before heading off around another reservoir and then more miles off tarmac, along the flat and then some downhill into the town before once again heading up, up, up. Thankfully this is the last huge hill, the rest of the route is up hill and down dale with one last awful downhill snicket thrown in just to dampen the spirits. Thankfully after this it’s just 1 mile back to the scout hut before filling up supplies and heading out for another 2 of these to die for laps and, if that isn’t enough, there’s a little 6 mile loop thrown in at the end.

I had swollen hands that eventually went down within 18 hours and feet that resembled balloons too, but I have since managed to get out and run a steady 4 miles.

Big question would I run it again ???
Simple answer HELL NO WAY!!!!!

It definitely was out of my comfort zone for running but I’m glad I managed to finish and I met some amazing people along the route.

These are the final standings for the 100: 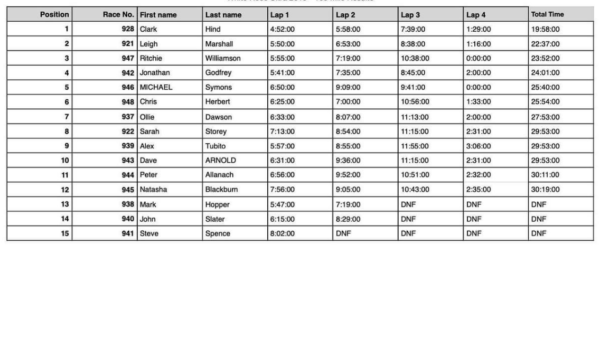