First, I am offering right now to provide a lift for four Striders (or arrange alternative transport for more) to join me at this race next year; I will definitely go again in 2020.

Second, you can’t find a Womble reference on Wimbledon Hill Road, in the Village, or on the Common, for neither love nor money; it is as if they are embarrassed by the whole, Mike Batt theme-tuned, thing. Closest I got was a cuddly soft toy hedgehog in a knick-knack shop. It’s okay though, as I already have a pepper mill in the shape of a Womble (Madame Cholet, I think). It isn’t very good at its simple job, as the pepper it produces is always either underground or overground.

When I saw the advert for this race I was hooked as soon as I saw the highly unusual distance, the slightly odd start time, and the proximity of Wimbledon Common parkrun (549 metres more than a 10k, 10:30 for the race start, and about a 20 minute walk between the two). Richard Pegg’s joy at a parkrun / cross country double is justification and confirmation enough for me to do the same sort of thing as often as I can.

The Common was a surprise for me, and yet should not have been as it was not totally dissimilar to Loxley / Wadsley Common. It is criss-crossed with paths, ‘rides’ (for horses) and trails with none of them coated in tarmac or concrete. They are all fine dusty grit or hard, lumpy packed stone, and so on this dry, breezy day I got a good fake tan of light dirt in the face and on the teeth. There’s a golf course, but with it being on common land and despite it being a private club, the course ran behind one green and in front of another!

The route was delightful (after the quick lap of a sports field to make up the distance and spread the field of runners). If I just tell you we went up Robin Hood Road, along Gravelly Ride and down Stag Ride you would get the idea. Sort of a sunny, warm Clumber Park, but with a sky full of international airplanes. Don’t imagine it was flat – 130 metres of height gain in the two lap route.

When you do these races away from Sheffield you do get a feel for what it must be like for visitors to run a race here when we hear all the ‘Go Striders’ shouts. The Windmiler who ran just behind me and then beat me over the last 1km was called Lorna. Every one of the many Marshals knew Lorna and shouted encouragement to her.

There was a fancy medal at the finish, and an impressive range of cake. The Mary Berry Apple Charlotte was particularly good. It was here I chatted with another Windmiler and I wonder if the two knights in shining Steel City Striders armour who sorted her a race number for the Round Sheffield Run earlier this year while riding the train up to Sheffield remember her? She ran in place of one of our Joes / Jos.

The prizes were awarded as soon as winners crossed the finish line, with impressive efficiency. Andy Weir (not our Andy Weir – surely he cannot move yet after his 100+ miles earlier this month) won. Finishers stretched from 39 minutes all the way back to 1 hour 36 minutes. This race would be really interesting in testing, wet conditions and I kind of hope for some of that weather next year.

I was happy to wear my medal back over the Common and into Wimbledon Village itself but it’s funny how a grown man can get rather self-conscious in smart, big-city, sophisticated places. Passing the local gold-painted Post Box (for Sophie Hosking; women’s double scull) I took off my medal and stashed it away.

First, and as far as I can tell only, Steel City Strider: 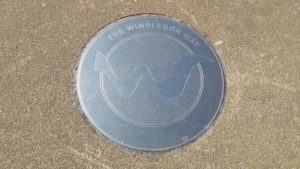 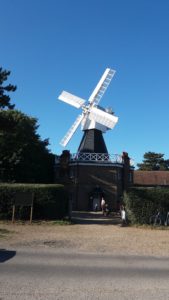 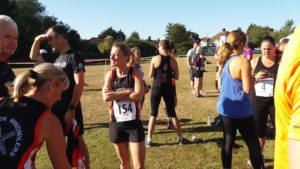