The race took place in a small suburb of ChesVegas AKA Chesterfield, known as Wingerworth. It is hosted by the local running club The Wingerworth Wobblers.

Apparently this was the first Hobble, born of the original Wingerworth Wobble held in March time each year with some slight deviations and more inclement weather. It was advertised as a 4.66-mile multi-terrain race on footpaths with short road sections.

The relentless torrential downpours of the week preceding Race Day caused serious flooding across South Yorkshire and North Derbyshire, this did not bode well for the course conditions. Loving a bit of mud and a puddle or two, I was not put off, in fact it made it all the more exciting. Then came the email from the organisers. A course Recce had been completed and the photographs of said Recce showing flooded streams and muddy paths were circulated for our perusal. This would definitely sift the wheat from the chaff and many may have had second thoughts at this point. Not us hardy Striders of course!

The day before the race ‘Flood Friday’ came and again the rain was relentless throughout the day.

Having started out a bit bleak, with misty/drizzly conditions first thing, it soon cleared up and there was a welcome respite from the rain throughout the day.
I had secured a lift with Mr Dalton who had reliably informed me that he used to live in the sleepy suburb of Chesterfield known as Wingerworth. I had every confidence in his ability to get us to Race HQ with plenty of time to spare. The Sat Nav however had a very different agenda and took us on a not so scenic tour of the housing estates of Wingerworth with no sign of the desired destination, Deerpark Primary School.

After eventually locating Race HQ we collected our numbers and were raring to go. For the first time ever at a race I encountered queueless toilets, now that was impressive.

A short walk to the start, a total of 93 runners (of which there were 7 Steel City Striders) were corralled into a Ginnel (for non-northern folk, the definition being ‘a narrow passage between buildings; an alley’) with no room for more than three abreast.

After a short countdown we were off, down the ginnel onto a housing estate and then the fun started. I would describe the course as hilly, with one particular steep, quite narrow section that resulted in many walking; I took full advantage of this opportunity. The terrain consisted of muddy footpaths, boggy fields, muddy fields and slippery stones with a few stiles and kissing gates to manoeuvre, it was hard going but throughly enjoyable with mud flying every which way. There was a very occasional stretch of road, but hardly worth mentioning.

Towards the end there was a nice downhill section onto a road, it was here I heard a marshal shouted ‘Only 400 metres’, but the rest of the sentence was a mere blur as I put my foot down to overtake my nearest competitors. After 400 metres had passed, the remainder of the sentence suddenly entered my consciousness ‘…until you leave the road’. No point in giving up and slowing down now, as I could hear the encouraging shouts from the finish line albeit it was still not in sight. A few hundred metres more, there it was…….a very respectable, steep climb through a squelching, shoe-sucking field to the finish line. There was no way anyone was going to overtake me at this point and with the most fabulous shouts of support from fellow Striders I pushed on to the finish with every ounce of stamina I had left. My body reacted to this sustained effort with three attempts to expel the minimal contents of my stomach, not at all pleasant and I will spare you the graphic detail. Once all fellow Striders had crossed the finish line and we’d secured a team photo, we headed off to Race HQ where shoe covers were necessary prior to entering the building. Post race beverages, soup and a roll and a selection of delicious cakes were on offer for a small donation.

The results, as follows, were projected onto a whiteboard before we had even finished our cake.

1st male was Luke Beresford of Ripley Road Runners with a time of 31:12

Prizes were only issued to 1st male and 1st female.

1st Strider with an outstanding 7th overall place was my very own running buddy, Mr Al Dalton with a time of 36.20 showing he continues to be a force to be reckoned with.

Hot on Al’s heels in a position of 8th overall and with a time of 37:01 was Robin Nelson, who is also showing great potential.

1st female Strider in 20th place (and 2nd female overall) with a cracking time of 40:01 was Sarah Allcard. 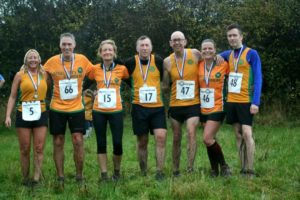