This would have been the last of the SYCAA five mile series had it not been for the sad demise of the.said series. Last year some 57 striders took part in this race. This year, somewhat to my surprise, I was the only representative of the club. Felt a bit odd to be at such a local race and to be the only person wearing green and gold. I can only assume that having to send both a cheque and a SAE in order to enter was just too old school for the rest of you!

The route features a couple of decent hills, the second one being the steeper. The last mile has to be run on the pavement (as per Keith Binney’s instructions but to be fair he had spent some considerable time clearing any obstructing branches out of the way) next to the busy A61 but at least it was a fast downhill mile.

Race winners were Scott Hinchcliffe of Penistone FR in 27:08 and Phillipa Williams (4th overall, unattached) in 29:44 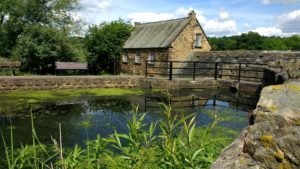 Worsbrough mill, where the race finished.