You would be forgiven for not recognising ‘Wymeswold’, even though you may have the word lurking in a misty back corner of the mind’s pastureland.

I wrongly described it as having just 150 residents in the race report from February: Wymeswold is a village of over 1,200 residents. It has two pubs, a Primary School, a couple of shops, and many sports and other activity groups (including Wymeswold FC, who were in the news recently when their Cup Final was abandoned amidst claims of racist language coming from fans on the touchline). 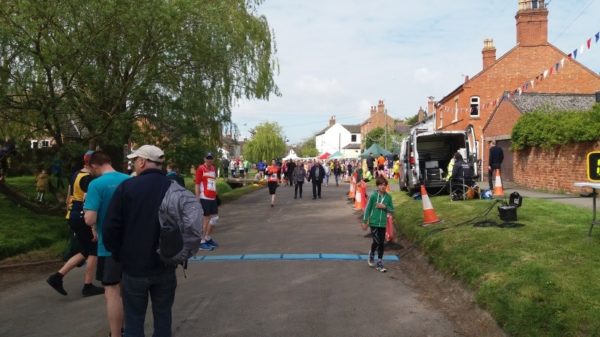 Wymeswold Running Club organise the Waddle on the same day as the annual duck race. There were / are stalls, hot food, Scouts doing coffee, birds of prey, a ride or two, and lots of duck-themed games to play. Over the afternoon the stream is host to five duck races. There’s an inter-pub tug-of-war. In other words, the sort of place you pay a premium to live as it is a thriving village, but only 5 miles from the city.

The race itself drew about 400 runners (Dash and Fun Run, of shorter distances, after). The route is simple: on a closed road the race goes uphill for a mile on a wide country lane, out of the village, then it undulates for a further mile and a half. There is the turnaround point, with a water station, and then a simple reverse and the route is exactly 5 miles. The only road hazards were two piles of horse muck: not a pot hole on the route.

Four tall, lean, relatively young males contested the lead from the off, and were still close together with quarter of a mile to go, racing down the slope to the finish. First across the line was Bruce Raeside of Kimberley & District Striders, in 00:26:07

The race saw six female runners in the first 30 finishers. First female was a fairly easy predication at the start line – tall, young and lean, just like those front four men, and wearing triathlon kit. Hannah Oldroyd of Ribble Valley Harriers, completed the five miles in 00:29:03.

As for me; an astonishing result. After four other races in the last twelve days, plus a spot of refereeing, ordinary Club sessions, two parkruns and the 5 to 10k development group, I was simply hoping to go at sub-eight minute mile average pace. I discounted the speed I clocked in the last 400m of the Trunce the Monday before, and hoped to just see a continued recovery and progress.

The hill out of the village was uphill, of course, but not Holymoorside, Sider with Rosie or Longshaw Trust 10 steep. I have my watch set on distance rather than pace so the only real indications of how I was doing was my position at half way (around 30th place) and the stitch that threatened at the 3 mile marker. After advising a young runner at Hillsborough parkrun last week to simply relax and breathe it away I did the same. I did not, however, let up with the effort. 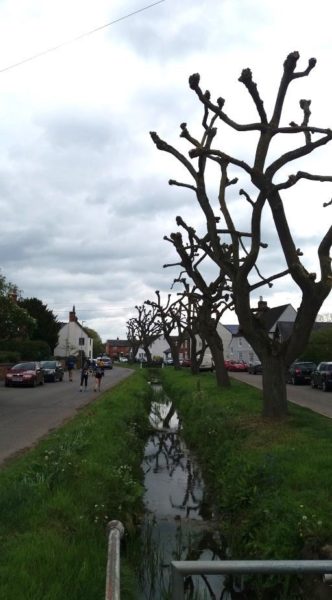 I ran it because it was roughly on the way back to Nottingham, to return the youngest to University studies, from a day and night in Coventry celebrating the birthday of the second son. You know you’re a runner when you check for local races wherever you go.

If you must run in this part of the world, do this race rather than the Half next door.

Bearing in mind all those facilities, a closed road route, a race that was chip-timed, a goodie-armful that included water, banana, a tech t-shirt (purple this year), and World Cup of Everything Best Small Chocolate Bar Winner (personal opinion) Freddo; how much was entry? Was it: