This Christmas was spent visiting my in-laws who had recently moved from Hertfordshire to the Suffolk/ Norfolk border town of Beccles. Spurred on by my recent PB’s at Percy Pud, then the Bolsover 10k and combined with the fact I I’m obsessed with running, I thought I would see if there were any races on whilst we were down that way.

Low and behold I came across Wymondham New Year’s Day 10k! Wymondham is a small town about 40 minutes’ drive from Beccles, not too far from Norwich. The event, organised by Wymondham AC is a popular race and sold out at the beginning of December. The race takes place on open country lanes just outside of town. To be honest on new year’s day morning they might as well have been closed as we didn’t really see any traffic.

The course was a bit hillier than expected but I was hoping that it wouldn’t be as undulating as Bolsover so I could try and get another PB. There were certainly more inclines than I would have liked (none would have been preferable) but I managed to keep the pace up enough to come in over the line in 46:07, taking 21 seconds off my time at Bolsover.

As expected I was the only Strider in the village.

Full results can be found at: http://www.chiptiminguk.co.uk/2019-results/wymondhamnyd10k2019?fbclid=IwAR2-9UmxlM3SJJOowEieefbWyMmzfwSxnLXjAqPNPkyOZGjLN6-mnAn-xUQ 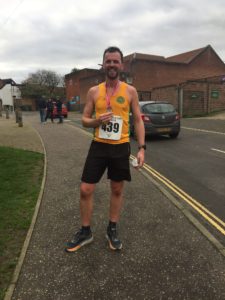