I’ve taken part in this event several times and every year the weather has been superb, blue skies and sun glistening on the sea. So we were due a bad one but it wasn’t actually as bad as forecast, a bit gusty and some steady drizzle but the scenic and varied route with lots of support really takes your mind off all that. The race starts at Scarborough Spa and goes out along the South Bay rounding the headland to continue along Marine Drive to the North Bay, round to the open air theatre and back down to the seafront returning to the spa along the sea front. It’s massively popular and fills to its maximum of 2,700 entries within hours of entries opening and no wonder. It’s really well organised by Scarborough Athletics Club and is an event for all the family with a fun run as well as the 10k. The first Male was Jay Ferns , Trafford AC 31.47 and first Female was Rhona Marshal Scarborough AC 38.39. Some good times from Striders here too,  most noteworthy is Helen Eberlin, not just coming first in her age group but smashing it by 10 minutes. For some reason my result was missed on the main list of Striders results but I most definitely did run :Cat V60, position 4/42. Chip time 51:48.  Gun time 52:22.

I like  Scarborough and the surrounding area, as does my partner who swears it’s her favourite place on earth. We tend to visit the place and stay overnight a couple of times a year, mainly out of season as we enjoy the relative peace and quiet, whatever the weather… which stood me in good stead when I crowded into The Spa for the start of the 10k on Sunday the 29th of September, along with 2,500+ more slightly soggy runners…
Before the start of the race I did a warm up, more perfunctory than purposeful and briefly saw a fellow strider whizz pass me… obviously done this before.  With 5 minutes left, I lined up just behind the 65 minute pacer, which was the time I was aiming for.
As this would be the longest distance I had run since I rolled my ankle in June, I reasoned that somewhere between 65-70 minutes was a realistic time to aim for. The organisers had informed everyone that this year would start in three stages, as opposed to two . This would reduce the inevitable bottleneck of runners which formed around valley bridge into the town centre. For whatever reason, this didn’t happen and we all went off in two stages which led to a bit of mainly good natured jostling. This also resulted in a very welcome chance meeting with fellow strider Amy Jenkins, who I briefly chatted to before the crowd started thinning out.
Half way down Marine Drive, I couldn’t see the 65 pacer flag behind me, so I reasoned that if I roughly kept at the pace I was, I’d exceeded my pre race expectations. At 4km I was totally focused, I was going well, perhaps I could even manage a bit more then all of a sudden someone stuck out an arm.. ‘Ooo look, shiny thing’ ..it was my first glimpse of canned water, ..think Dory finding Nemo!
Anyhow, after I had come to terms with the sense of awe, I returned to focusing on the race. By the time we had turned at the 5k mark, I still felt full of running, my ankle wasn’t grumbling , even the rain seemed to be slowing down. Then at about 7 km I spotted the 60 pacer, and thought give it a go. Almost immediately, my left foot slightly tilted towards the sea wall, a timely reminder that I was running on wet pavement.
No damage done, and I was now heading the back into the town centre. At this point, a fellow runner came bang along side me and said something along the lines of how original our club colours are, where exactly was I from? What! l At this point I was totally focused on the 60 pacer, and was starting to feel the effort.  I gave him a look, manage to get the word Sheffield out then off he went!  By the time we passed the harbour I was feeling less optimistic, a couple of runners with who I had been pacing off glided effortlessly past me. Obviously they’d actually been pacing off me. Before I knew it, we were back at the 400m marker but I was only about 20 yards off the 60 Pacers.  Next thing, I’m heading towards the finish line,  looking over my shoulder at the two 60 pacers  behind me.
Crossed the finish line absolutely hangin, waiting for the text ping showing my chip time. 59.03 my first sub 60 10km.
The race is getting more popular each year, and I can see it hitting 3,000 next year. As much as I love the place and the event, it’s crucial to its continuing success to sort the starting procedure out. Otherwise The Scarborough 10km could become a victim of its own success.
Striders results:
Full results: here 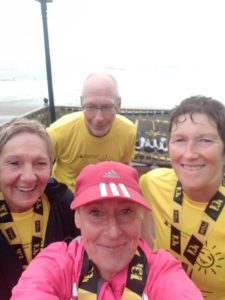