You get the idea – we had a really good day out at ‘Yorkshires’. After a Parkrun warm-up (or not) a bus-load travelled up together in the usual cheerful, comradely atmosphere.

Before any competitive running, we had a simple medal presentation to the Women’s Team from their success in the South Yorkshire League 2018. Whoop, indeed.

There is a whole programme of races but, as grown-ups, we are only there for the sharp end of events. Women go first, a measly four medium laps including the same steep bank on each lap, running a little over 8 km. Leeds and Rotherham were most impressive as teams. Barnsley were simplest and crudest in their response to being urged up the bank (think raised middle digit). The Senior Men’s Race was the last of the day, running pretty much the same route (one medium and four larger laps – five times up the bank), a little over 10 km. Normally this would be churned up and made wet by the thousands of feet that have gone before, but not so today.

There are no medals or t-shirts to every finisher at these races (but then the entry fee is covered by the Club), though you can usually pick up / buy a great sweatshirt at the nationals. What there is is a great level of challenge, physically and mentally, balanced with a marvellously supportive atmosphere where every runner, Olympian or not, is cheered on without a trace of patronisation. The fellas cheer on the ladies, and the ladies cheer on the fellas in turn, and we all stay until the very last is done.

There are three more Cross Country events this winter – Northern Counties at Pontefract later this month, Nationals at Harewood House in February, and, for the older member, Veterans in early March (tbd). I whole-heartedly recommend these races to all our members.

One last point – if the organiser of the RRC 2019 would just like to scan over today’s results he / she might want to revise (yet again) which division certain runners are placed in! 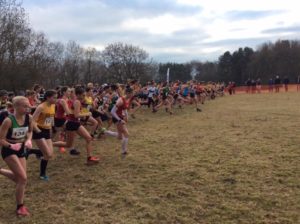 The start of the women’s race – you can see the gun smoke rising! 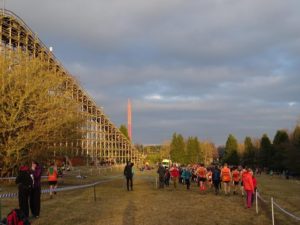 Yes, it is at THE Lightwater Valley. No, we didn’t run up and down the rollercoaster. 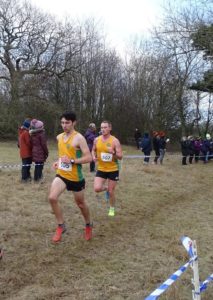 Attack and drive after the steep bank.

There are lots more photographs on the Facebook pages.