If you’re anything like me – and let’s hope, for mankind’s sake, that you aren’t – then you’ll spend the days, weeks, perhaps even months before a race ruminating on the same themes, pondering the answers to the same questions and obsessing over minutiae that rear up at the forefront of your mind to assume the significance of an assault on the North Face of the Eiger. You find yourself attending mid-week talks on ultra-running (hey, it’s gone ‘running’ in the title….), surrounded by other people for whom the idea of treating the sport as ‘just a hobby’ is almost sacrilegious. You timetable your weekend – and that of your family – around the fact that you’d quite like to ‘squeeze in’ a twenty-two mile run (Three and a half hours, your spouse replies with thinly-veiled contempt when you tell her how long you’ll be, and she realises she’ll have to take all three kids to the supermarket with her because you’re planning on pootling along the canal tow path to Rotherham).

As the Yorkshire Marathon drew ever-closer, I found the following questions rattling around my head constantly like bee stuck inside a conservatory on a hot day: What’s 42 times 4 minutes? What’s that in minutes per mile pace? During the race, how many energy gels should I consume? How long do I need to spend at home or at work in order to create an illusion of wanting to be there rather than out running? (the answer, I’ve discovered, is, ‘the amount of time you feel is acceptable plus, inevitably, the exact amount of time you want to spend running’.) Yet I felt a kind of justification for this tunnel-vision. I don’t like to do things by halves; if I’m into something, I want to do it well. The more I think about it, the more I read, the more I talk to fellow runners, the more I realise that we subscribe to this mindset just as much as, if not more than, than participants in other sports – or participants in any activity, for that matter. It’s part of the beauty of running. Its simplicity, its innate sense of rightness; you set your own goals, and it’s just you versus your own body and your own mind. You’re the one in control. Yes, there are other people who are faster than you – but who cares about them? You can define your own success. I’m sure Mrs Cooper was calmly meditating on these and other such thoughts during the aforementioned trip to the supermarket.

Despite having had my thunder well and truly stolen by Eliud Kipchoge the previous weekend, I headed up to York with a reasonable level of confidence in the fact that I could lay down my own ‘first’. I’d followed a strict dietary regime that week, remembering to have both cereal and toast for breakfast, limiting myself to approximately some beer, and taking a 4 pack of Double Deckers to school (which I then had to hide in my desk so as to avoid setting a bad example to my class). After a lively jaunt around York’s second-hand bookstores and a brief flirtation with the National Railway Museum, I spent Saturday afternoon relaxing in the company of Christopher McDougall’s Born to Run. When it was time to put on my jim-jams and head up the hairy mountain, I shoved in my bookmark at the line, ‘Tomorrow, you’ll see what crazy people see. The gun fires at daybreak, because we’ve got a lot of running to do.’ It seemed apt, although I was thankful that for me, the gun was due to be fired at the more socially acceptable time of half past nine, and that the field wouldn’t be made up almost entirely of the world’s best ultra-runners who would then leave me standing with their killer pace.

During the hour-and-a-half or so of pre-race faffing around the University of York campus, I kept my eye out for fellow Striders. Some, like me, were there for the 26.2 miles, and others for the shorter (obviously) but still-demanding 10 miler, which was due to start 45 minutes after the marathon. I was lucky enough to exchange encouraging words with a handful of folk (a special mention here to my friend and training buddy Dave Whittaker, who was doing the 10 miler and with whom I’d done some of my longer runs during the build-up to the race) before heading off to my starting pen. There, I listened to the inane prattle of someone from BBC York for a bit, before the traditional ignoring of the official warm-up and interviews with minor celebrities. It was jam-packed in there, with runners coming from every armpit of the UK. One guy I spoke to had come from Essex on the basis of the course’s PB potential, another had made his way down from Kilmarnock. Yorkshire was, as you’d expect, well represented at the sharp end. Being more of a tarnished, flea-market fish knife than a surgical blade, however, I nestled in behind the three-hour pacer, and we were off.

Once the early jostling was out of the way, we moved smoothly through York city centre, passing decent support outside the Minster. I caught a few shouts from Strider supporters amongst crowds, which I appreciated, and managed to high-five someone in a dog costume, seemingly making their day in the process. Let’s hope that the people in white coats found them shortly afterwards and took them away to some ‘special kennels’. As we headed out of York, a light drizzle began to fall, but by now we were well warmed-up and settling in for the long haul. Housing estates gave way to farmland, and before I knew it, I was high-fiving the famous high-fiving vicar outside his church just before the 10k marker (I was on my way to achieving a personal best number of in-race high-fives by this point).

I’d got myself nestled in with a group of four or five runners who were obviously sticking to four minute kilometre pace, and so we spent a merry hour or so in total silence, each of us enjoying the Yorkshire countryside as a backdrop to their own inner monologues (that’s what I was doing, anyway; that, and making mental notes for this report). Every so often we’d pass through another well-to-do village called something like Nether Cockwallop or Upper Fandango, the scent of freshly-printed Sunday Telegraphs mingling with the reek of manure to create a subtle fragrance best described as Eau de Boris. The thirteen mile point came and went, before I got my first sight of any fellow Striders during one of the out-and-back sections – in this instance Jonathan Shaw and Luke Smith, looking good and sticking with the three-hour pacer.

Then came a hill of sorts. I always seem to end up moaning about a hill whenever I write a race report. I honestly do love hills – it’s just that they get in the way so much when you’re trying to run fast…. Anyway, I ground this one out (it was more of a long and steady incline, really), but my fellow four-minute-per-kilometre-ers were starting to inch away at a rate something akin to continental drift. As we approached the second turn-around at around mile 17, I was cheered by the sudden appearance of Andy Davies at the roadside.

“It’s saying 2:53,” he shouted at me, referencing some kind of witchcraft he had installed on his mobile. I gave him a thumbs-up and muttered something incoherent and stupid about ‘keeping it going’ – which it turns out I couldn’t quite do. Despite a high-five of encouragement from Joseph Mallinshaw as we passed on the out-and-back, I was beginning to find the pace tough. Maybe it’s time for another energy gel, I thought (I think I’d had four up to that point). I apologetically fumbled wrapper number five to an elderly local resident; I’d just heard a small boy complain loudly that another runner had ‘thrown his wrapper on the floor, Mummy!’, a shocked observation that was answered with a purse-lipped, ‘Yes, he did rather, didn’t he Tarquin?’ (in the interests of accurate reporting, he may not have been called Tarquin. But he probably should’ve been).

As we passed the point at which the 10 milers re-joined our route, I was being overtaken by a steady dribble of marathoners who’d made a slightly better job of pacing their race than I had. I knew I had to dig in. I covered the final couple of miles under the wraith-like shadow of impending cramp, but was given plenty of encouragement by the folk lining the streets approaching the University (I sensed that some – the ones on their feet and looking at your race number to get your name before shouting something heartfelt – were offering their support from a position of experience). Once I’d made it over the final rise and had begun the 400 metre-or-so downhill cruise to the line, I began to relax – a sub three-hour marathon was in the bag. With a few metres to go I collected high-fives from my three kids (taking me to a grand total of six, in case anyone’s keeping track), allowed myself to be captured looking stupid on numerous cameras, and crossed the line to almost immediate bouts of cramp in leg muscles I didn’t even know I had.

As my family – and Dave, who’d kindly stuck around to see me finish – came round the corner to meet me, I’m not ashamed to say I was a little overcome with emotion. Yes, my legs were hurting, and I felt more than a little nauseous, but they weren’t the reasons I why I suddenly found myself crying onto my wife’s shoulder. I realised that I was beginning the process of reflecting on a journey, on how much it meant to me to have set my most challenging race goal yet and to have achieved it. This was the culmination of everything that all of us will identify with; those pre-dawn runs when your fingers are freezing and your eyes are still puffy with sleep; those brutal and often mind-numbing twenty-plus milers through some of the less salubrious but topographically more appropriate parts of town; those snatched twenty-odd minute mid-week runs that are sometimes all you can fit it or even manage given how tired you are. But it was also the culmination of those joyous, endorphin-fuelled sessions when you feel like there’s nothing else that you’d rather be doing and that there’s no place you’d rather be; when you’re moving freely along your favourite country lane, the views opening up before you, and life has its meaning and purpose. That, I was thinking, is why I run. It’s why we run. Sign me up to do it all again next year, I thought, before chundering into my Run for All goody-bag on the bus back to York station.

I’ve already mentioned a few of the Striders who took part in either the marathon or the 10 miler, and I know a few had issues with not appearing as a Strider in the final results. I’ve tried to track down any that I know of, and include them in the list below. I apologise if you’re not on the list. Feel free to append your name to the Facebook post that will inevitably herald this report. For those interested in such things, the men’s marathon was won by Mark Buckingham (of no club, according to the results, but of Holmfirth Harriers, according to the internet) in 2:21:42. The ladies’ marathon was won by Charlene Jacobs-Conradie of Luton Athletic Club in 2:46:48. The men’s 10-miler was won by Matt Kitching of Queen’s Park Harriers in 53:09, and the women’s event was won by Sharon Barlow of Harrogate Harriers in 58:52. In the wheelchair event, the first male competitor home was Bret Crossley of Leeds & Bradford Triathlon Club (1:58:20) and the first (and only) female was Caroline Phillipson, of no club (2:25:57)

Strider results from the marathon:

Strider results from the 10-miler: 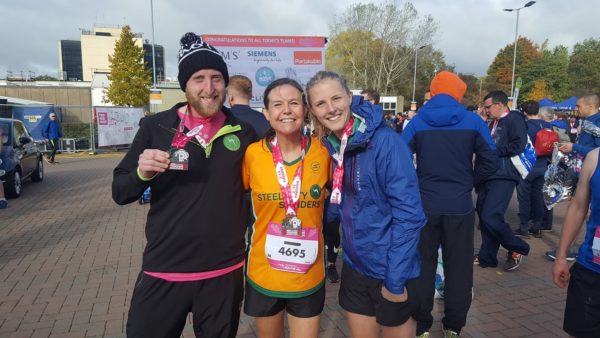