Having been tipped off to the presence of cheap silverware on offer in Hull, fourteen Striders descended on the Costello stadium for the Yorkshire Vets Cross-Country Champs, looking to trade sweat for trophies.

The venue may have lacked the glamour of some of the cross-country season’s earlier locations, but the course was varied and immaculately marked out. A flat section twisting around a park and a wooded section up, down, and around some muddy embankments combined to make a 2.5km lap with plenty of opportunities to see club-mates go past. After two weeks of rain, there were a few water features to contend with, but it was all runnable: muddy enough to feel like cross-country without really holding anyone up.

The main difficulty in getting hold of the bling wasn’t going to be the running so much as the mathematical complexity of the scoring system. Individuals would compete in five year age categories, and be put into teams in ten year age bands (with the option to run up). Prizes would be awarded to the best teams of three, five, and unlimited members in each band. With a limited number of runners to allocate to teams, as many competitions would be won in the filling in of the entry forms as out on the field.

The women and the oldest men went first in their race of two laps. The men scattered around the course and cheered them on. Despite a head-wind like a brick wall on an early drag next to a path, they were all moving pretty well. On the second lap I disappeared to get ready for my race, so missed them finishing, but was later greeted by a group a female Striders weighed down with trophies. Sarah Allcard had been first back in 23:33, but Helen Eberlin had won the F70 category, while Mandy Taylor and Carol Beattie had come second in the F55 and F65 categories respectively. Mandy, Angela Jackson, and Helen had also won the F55+ 3-to-count team prize, and had been given medals and a shield for that. The shield was later taken back and given to the winning 5-to-count team, so it clearly wasn’t just us finding it all a bit confusing, but the medals were definitely theirs to keep. 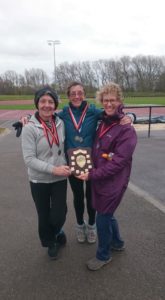 The second race saw Richard Pegg take on Stuart Jones in the “Ill vs Injured” 10k challenge. Ill led for the first two laps, but then Injured closed him down and a truce was struck. In the end Injured finished a second ahead, crossing the line in 42nd place wearing number 43, with Ill finishing behind in 43rd place wearing number 42. Clearly they were meant to be the other way around. 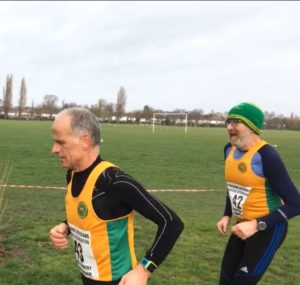 Finally it was the Relatively Young Men’s 10k. Here we had strength in the M35 category and decided to concentrate our resources there. Three men flew off the front, scuppering Andy Norton’s hopes of an overall podium spot, but he saw off everyone else to take 4th overall and 2nd M35 in 39:03. Behind him, Tim Holt, Alasdair Menmuir, and Malcolm Baggaley provided good backup, dominating the 3-to-count M35+ competition and providing the 3rd M40 to cross the line.

In the pub afterwards we crunched the numbers and taxed our brains, and worked out how we could have maximised our prize haul with a tweaked admin strategy involving passing Stuart Jones off as a 35-year-old. Perhaps we got our fair share as it was. “This is more complicated than Brexit” was difficult to argue with.

Special thanks to Richard Pegg for organising this and other cross-country events throughout the 2018-19 season.