Ashbourne Seesaw was on a nice bright but cold day. The only snag was the huge ‘puddle’ at the beginning, those who do XC would not be fazed by this, but it was deep & freezing & took your breath away right at the start! At least one poor runner came a cropper & fell badly as there were stones either side of the path & hidden roots pushing up the tarmac which were hidden by the water, one lady had to be helped out of the race right at the start.

I did it last year when it was the Ashbourne 10 & it was much better managed this year. It has a number of categories including Canicross, which caused some issues last year when it wasn’t such a phased start on what is quite a narrow trail at certain points. Thanks to SBR events who organise this race, well done guys & as usual a special thanks to those who marshalled, especially the lady who was welly deep in the puddle directing runners in the dark & cold of the tunnel, still smiling at the end!

I made the mistake of thinking that the half marathon runners would be after the 5 & 10KM so I started off late, like an idiot. Was a lovely day for a run but I got a PW, so it’s time to dust myself off & try harder next time!

101 runners took part in the Ashbourne Seesaw Half marathon. Anne Green was the only Strider.  The race was won by Richard Steeples of Lonely Goat RC in 1:30:27.  The first woman home was Katie Rolfe in 1:43:57 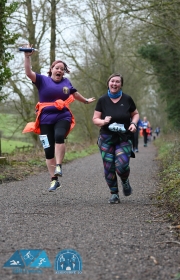