Athletes of a certain age bemoan how standards in road racing have fallen compared to thirty plus years ago. A reason often attributed for this is the parochial nature of the sport in modern times and the sheer number of races now available on any given weekend of the year. It is theorised that this has had the effect of diluting quality at the sharp end for if you wanted to race back then, with fewer races on the calendar, most of the top athletes would be there too with the effect of dragging up performances throughout the field.

Due to the current emergency, bona fide races are in scarce supply and the Bassingham Bash was a bit of a throwback with some athletes travelling prodigious distances in order to take part. The effect was that seven men ran under twenty five minutes with eight women under thirty minutes out of a greatly reduced field of less than one hundred finishers; there were over 300 competitors last year.

The course is pancake flat but with a cold northerly wind conditions were not ideal. However, first woman Chloe Hubbard (Newark AC) ran a pb of 27:11 which also smashed the course record.  First man was M40 Alastair Watson (Notts AC) in 24:00 which was also a pb and new course record.

Interest for Steel City Striders was provided by Sam Brown and Sian Evans who both ran pb’s of 28:02 and 30:03. To put this in context, equivalent to about 34:49 and 37:16 for 10k and not bad considering that training for both (and many other) athletes has been at best intermittent over the last few months. 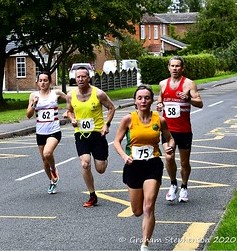 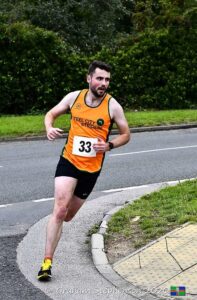 Sam Brown: the eyes say it all.
Photo Graham Stephenson

Covid protocol dictated that athletes were required to gather on the cricket pitch before being led out onto a Formula One style starting grid in groups of ten with slowest at the back and fastest at the front. Once assembled each group was set off in turn at approx. ten second intervals, finishing positions and times being determined by chip timing. Along with other athletes Sian remarked that arrangements seemed to work well and once underway there seemed to be little overtaking showing that athletes had been honest with their times. An observation from many athletes was that they would have preferred a shorter gap between groups; giving somebody a ten second head start makes life difficult. Covid instructions also dictated separate car parking arrangements according to your race number with spectators discouraged and, if coming, asked to stay away from the start/finish area. PPE for marshals who were told to keep the mask on if giving instructions or encouragement to competitors. With permission from the local authority and the local police onside promoter Bill Taylor and his team did well to get this event on the road.

My own experience woking on the starting grid was that things were perhaps more hectic than they may have appeared but this was the first time that we had ever tried this sort of thing. A de-brief pointed out things that went well and not so well although, please, we don’t want to have to do this again next year.

No t-shirt, no gong, and not even a group photo, just a good race. Link to full results Bassingham Bash 2020 Results 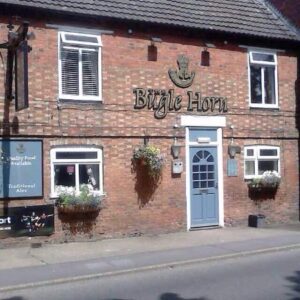 De-brief in the car park of the Bugle Horn. With the event usually being run in August it was remarked that this was probably the coldest Bash on record.