The void between Christmas and New Year in the past has usually been filled with me eating chocolate and sale shopping, both not something I was willing to do this year. When the Beeley Woods Xmas relays popped up I thought this was an ideal excuse to get out of the house and put the post-Christmas blues at bay. Plus it was for a worthwhile cause (Mencap) and more importantly, flat and relatively short. I was willing to run but not up a hill.

I arrived with my pre-organised team and I paid my third of the £10 entry fee- far cheaper than the hoover I had my eye on. We were given timing tags and handed a festive cracker for a baton- a nice touch.

The race was different to any I had run before. Get your brain in gear for this explanation: not easy to put on paper.

3 team members (let’s call them A (Dawn Short) B (James Broomhead) and C ( Sarah Ward) and 2 different legs. Each leg would be run by each runner. Before the race started James had to make their way over to the changeover point a mile away. The race started Dawn ran to James via the main path in Beeley Woods, James then ran back to the start point on a muddier trail to changeover with myself. I then merrily ran to the point where Dawn was now positioned (the original place that James started) for a second round of changeovers where each runner ran again- Dawn to James via the muddy path, James to me along the main path and I ran the victory leg to the finish via the muddy path. By this point some of the crackers were looking a bit limp.

Despite it sounding complicated it wasn’t really. The usual great sportsmanship and chat at either end of the course was as it always is.

The timing devices developed by Chris Lawson worked really efficiently, he had also set up a screen within Oughtibridge WMSC so that we were able to follow the progress of the race as it was occurring.

Afterwards at the club a fetching vase was presented to the overall winners and medals presented to winners of each category, making it very inclusive. 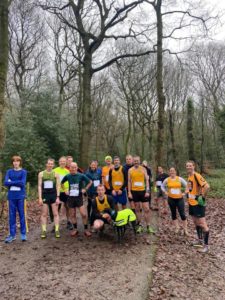