My race prep for this was bad even by my standards. Friday night I went to Indie Beer Feast at the Abbeydale Picture House, and clearly got drunker than I thought because Saturday played host to an outrage of a hangover that prevented me from getting lunch. I’d recovered enough by mid-afternoon (with the help of some effervescent paracetamol from Boots) to spend Saturday night stewarding at day two of Indie Beer Feast, so tea was some Lebanese potatoes, a chicken bao, half a cider and another beer.

Sunday morning did not dawn bright for me, and when I heard the rain I’d all on to get out of bed, wolf down a bowl of porridge and a big black coffee and jump in the car. The journey was uneventful once I’d worked out that the postcode they give you isn’t accessible by road so you can’t satnav to it. Word to the wise though: a lot of long-distance van drivers overnight at the services outside Burton, and they use the bogs just before whatever time I arrived.

Cannock is apparently where I spent the first three years of my life, though that’s pretty much the only Cannock fact I have at my disposal. Cannock Chase looked lovely though, with lots of warning signs about deer. This race, and the 5-miler that goes with it, had been postponed from Storm Ciara weekend, when the park authority had deemed it too dangerous to race through the woodland, and you could see why, with Forestry Commission pines stretching off in every direction.

Race HQ was about 15 minutes’ walk from the car park, and was notable for having hand gel in the portable toilets (work that one out, future historians) and for “The Johnny Nitro Lab” which appeared to sell coffee, tea and cocktails. Sadly I’d left my wallet in the car. 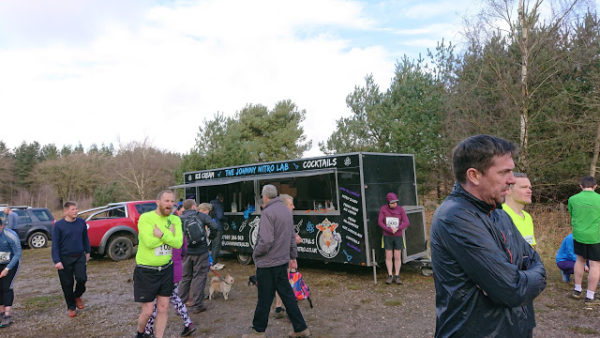 This was only the second year of this event. It’s two five-mile laps, on a mixture of gravel and earth trail. I set off with a time of 78 minutes in my mind, or a fallback position of 80 minutes. That meant keeping it a bit below 5 minutes a kilometre, but not as fast as the Norton 9, given this was a trail race.

The first two miles were a bit worrying. “Oh hell. This is a flat race. I’m useless in flat races. They wear me down.” It was only later I realised that we were in fact gradually descending, and the organisers were about to hand me every Strider’s secret weapon: lumpy bits. Nearly 300m-worth of lumpy bits over the two laps in fact. I soon learned that even my plodding climbs and amateurish descending were worth something here, and my heart leapt for joy as I windmilled down gravelly hills and splashed through ruts and puddles while the locals mostly tried to go round the edges.

It didn’t last, of course. The last kilometre of the lap is a grinding uphill on gravel, and my tired mind completely wandered off elsewhere. It was hard work to bring it back, by which time I’d lost momentum. The start/finish line arrived just in time. The five-milers peeled off to the right, and the field thinned out.

I decided the only thing to do was to run as hard as I could and hope that I didn’t run out of “could”. There wasn’t even a Strider-in-front to latch on to. I spotted a tall bloke in a vest that looked like a Dutch flag and just spent two miles busting a gut not to lose him. The start of the hills gave me a boost, as did the end of my Lucozade, and between Dutch-flag guy and beginning of hills, miles 6 to 7.5 were my fastest section of the race. Others were beginning to tire, and I managed to lose a few in the mud, which was nice. I was really knackered now, and despite managing to overtake my pacer (he told me later he got a blister because he’d put his sock on backwards), I seem to have hit a wall at 7.5 miles. I think it’s where I briefly stopped to check on the guy in front, who’d landed on his backside in the mud. I never quite got my momentum back. At the bottom of the last climb, there was a gap of several yards in front of me. Someone overtook me and said “well done mate”, and I’m really grateful he did because the friendly voice and the someone just in front of me gave me enough to track him up the hill and finish, after which I spent about five minutes with my hands on my knees, wondering whether I was going to fall over.

I’m pleased-ish with my time, given the terrain, and I’m pleased with how hard I managed to push myself. But I’m also annoyed. At some point I need to stop arsing about and prepare properly for races. I’ll never be a particularly fast runner, but it would be nice to push myself a bit further while I can.

If this race weren’t 90 minutes’ drive away, I’d heartily recommend it. The course is deceptively challenging, the organisers and marshals are good and the scenery’s lovely. Definitely one worth doing if you’ve a reason to be down that way, and they have fig rolls at the end too.

The race was won by Kevin Powell of Leicester Tri Club in 1:02:00. First woman was Annette Belcher of Royal Sutton Coldfield AC, in 1:16:00. She was 18th overall.