Is this the new normal?

There had been no races for so long. My programme for a year of carefully spaced trail half marathons was in tatters.

I can’t remember how the Carsington race was brought to my attention – presumably by a friendly Strider. But was this just another event that would bite the dust? Reading the blurb suggested that considerable thought had been put into it.  And it was off road and circular so there was a better chance that the powers that be would approve it as Covid-19 compliant. It is part of the Derby Race Series and is, as the title suggests, a 7.5 mile circuit of the reservoir with ‘spectacular views across the water and beautiful Derbyshire countryside’.

Any concerns about the organisers’ commitment to Covid-19 compliance were banished on receipt of a 16 page instruction manual – waves according to estimated finish time, face masks encouraged before and after the race, keep 2 meter distance, no water, no spectators – but if there were any spectators there was additional guidance for them.

Two days before the event an email was sent out reiterating the rules and with a useful table setting out the arrival time, toilet use time, assembly and start times for each of the 5 waves of 100 hundred runners.

On the morning, despite a random road closure close to the reservoir with no diversion signs, I arrived spot on for my arrival time.  There were plenty of marshals to give clear instructions of where to go in the ample car parks.  There were marshals keeping good natured control of the toilet queue.  There were clear tannoy announcements directing us to the assembly point which was sufficiently large to enable 100 people to wait for their call to the start line and remain socially distanced.

Before the start line there were cones 2 meters apart and three abreast and runners were called up in numerical order to cross the start and still remain socially distanced. Once over the start line, masks off, the social distancing went to pot, but it appeared that everyone had been fairly truthful about their estimated time as there was relatively little overtaking.  There were walkers coming towards us but this did not present a hazard.

The weather was sunny with a sharp, cold wind although the latter dropped for most of the event until the final portion of the race along the dam wall when the wind whipped up again and led to me running on the spot, if not backwards. The views around the reservoir were very pleasant indeed, and reminiscent of the Striders’ 10K with a better path surface and shorter, and despite an overall elevation of only 293 feet, no less punishing uphill sections.

After the finish line runners were encouraged to move away quickly, use the giant hand sanitizer dispenser, pick up a bottle of water, then a t-shirt and leave.  The car parking could be paid for online so you could get straight in your car and drive away.

The event was extremely well organised and despite all the restrictions in place extremely friendly and enjoyable.

I had expected to find a significant posse of Striders but there was in fact only one other, who regrettably I failed to spot.  In a field of 426 runners, first male was Daniel Bagley of Holme Pierrepont Running Club at 41.06, and first female was Kelly Butler of Birchfield Harriers in 46.12

For full results to go www.carsington7.co.uk/results 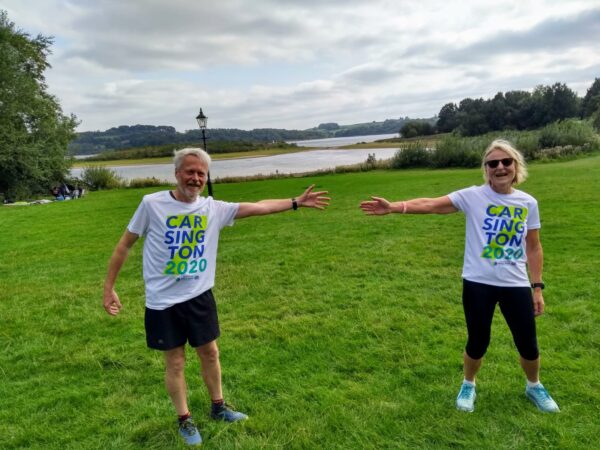