Covid 19: Not exactly a race report, more an account of time trials and challenges.
British Mile Club Bannister Virtual Mile
European Masters Athletics 5K Virtual Challenge.
Spring 2020 should have been the start of the race season. The British Masters 10mile championship in Poole, Dorset in February was cancelled because of Storm Dennis. The Home Nations International Half Marathon in March in Fleet was cancelled at the very start of lockdown and then London Marathon and the rest got furloughed for the foreseeable future.
It was great to begin with. A gentle jog during the one hour government rationed exercise period, dodging walkers, dogs, bikes but with lovely wide car free roads. Families came out in small clusters, the air got a bit cleaner and the vapour trails in the sky disappeared.
A few weeks into lockdown and with no goals to train for I started to look for challenges. The Striders were offering the Doorstep Challenge and Stride for Sheffield which kept us moving and contributing to local charities. Then up popped the British Mile Club Bannister Virtual Mile time trial to be run locally between 4th and 6th May, the date of the 66th anniversary of Roger Bannister’s historic sub four minute mile in Oxford.
I entered online along with 1970 other athletes around the country, paid a small fee to the nominated charity and chose Millhouses Park as my route. The newly formed parkrun at Millhouses has a 1 mile circuit with little elevation. It’s hard to run flat out when there’s no one else there to follow but I treated it as a training session, arrived very early to avoid crowds and ran as fast as I could round the course, stopping my watch as it buzzed the mile. it’s the loneliest race I’ve ever done. I felt a huge pang of nostalgia for all those wonderful parkruns with dozens and then hundreds of fellow runners now languishing at home waiting for normal life to resume.
Uploading onto the Opentrack website was a trial for me as I have no technical skills and no kids nearby to help. With Mick Wall’s patient virtual assistance I finally uploaded and ‘embedded’ the strava data and waited for the results.
First was Piers Copeland, SM, Wimborne in 4:02.00.
First woman was Lilly Coward, SW, INVIC in 4:38.00
I was first of 3 F65 in 6:59:00, recording 92.52% age grading, 9th of the first 10 Age Graded performances. Yvonne Twelvetree 7:11:00 and Pat Goodall 7:25:00 of Totley AC were the other W65’s in the challenge so Sheffield represented our entire age group.
European Athletics Masters Virtual 5K Challenge.
The European Masters Association then posted the first of a series of virtual challenges so with the Bannister mile done and dusted I turned my attention to the next challenge. Millhouses gets busy so with advice I went down to Neepsend for my 5K challenge. It’s flat and very quiet at the moment, businesses closed and traffic light. Again a 1 mile circuit from the Gardeners Rest pub near Wickes DIY store along Neepsend Lane, returning on Infirmary Road. I chose to do it on Saturday 9th May, Europe Day. Unfortunately for me it was a very hot morning but I was psyched up and ready to run.
The first lap was fine. There were no pedestians or cars so I had a clear route. I managed a lap pace of 7:08 which I was able to match in mile 2 but by the third mile the heat, lack of other runners and general fatigue took over and I slipped down to 7:20 minute mileing. A finish time of 22:20 would have to do. I couldnt face having to repeat it.
With virtual technical help I downloaded and embedded the result onto the Opentrack webpage and waited for the reults to be declared on 21st May.
First was James Reed, M40, GB in 14:58
First woman was Laura Hesketh, W35, GB in 17:13.
I was first of 6 W65 representing GB in 22:20, Age graded score 91.97%, 8th of the first 10 age graded performances.
Full results can be found on https://data.opentrack.run/x/2020/CHE/emvrc/
Great Britain won the challenge with an average AG of 92.45% followed by Romania, 79.55% and Germany, 75.76%. GB was well represented in the challenge of 346 finishers across Europe and beyond.
Other Sheffield participants were:
Anthony Whitehouse, M65, Totley, first M65 in 18.10, wow!
Chris Guy, M40, Steel City Striders, 18:19
Jed Turner, M55 of Sheffield Running Club, 19.23
Gareth Irvine, M40, Sheffield Running Club, 19.31
Yvonne Twelvetree, Totley AC, 25.01.
The oldest competitor was Herbert Müller, M90, Germany in 40.26.
There will be a number of virtual challenges in the coming months until we can all meet again in friendly competition. Check bmaf.org.uk  for details.
Dot Kesterton
24th May 2020. 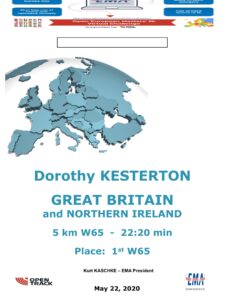 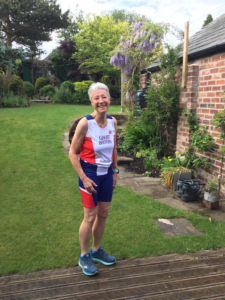