Saving the Best Til Last – Striding at the Back

What a miserable wet morning but thankfully not as bad as it started out (did anyone else see the rain at 5.30am?) Spirits were high and there was a huge turnout of green & gold. A chance for everyone to get some points for the all important Road Race Championship.

We left it to the last possible minute to remove jackets and hoodies and expose our race tops to the elements. I made my way to the rear of the field – under no illusions from the start of my predicted speed – and then we were off. Considering the crummy weather, there was quite a big turnout of supporters to cheer us on our way.

Now I only hit 10k all running for the first time last weekend so I started at a steady pace and slowly but surely within 2km I was virtually at the back. That darned first hill was not helping matters. I always find those initial kms hard enough until I’ve warmed up as it is without immediate hillage! Think I managed about 3km before I started to get lapped.

So many Striders flew past me it became a yellow blur. Thanks to all those SCS guys and gals who shouted encouragement at me. It did help!

It was at this point I just got into my pace and knew I could do it. Passing the finish area when so many are turning in when I still had a lap to go was quite hard but, after that point, I could just focus entirely on my own run.

Those hills were tough for me and second time round were harder still. The lovely people of Dronfield and the marvellous marshals were very encouraging and, although I knew I was very near the back, were still cheering and clapping.

The 8km to 9km stretch was the longest km in the history of time. Although I appreciated various Striders giving me encouragement at this point, it was a little off putting that they were actually in their cars heading home … !!!

Well I got there eventually and did a superb sprint finish (there were witnesses). My lovely fellow Meersbrook Milers had waited for me. They really are the best.

I may have been the last Strider home but for me that was a hard race and I gave it my all. I am very proud to have been in my gold and green and don’t think I did too bad considering what the past year has thrown at me.

See you all in the next race of the RRC!

This year’s Dronfield 10k was won by Alfie Manthorpe of City of Sheffield and Dearne AC, in 32:37. First woman was Strider Heather Hatton, in 41:34. 125 Striders (estimate at the time of writing) finished. 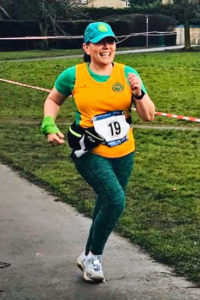