Initially there was considerable interest in the prospect of competing in a flat race in a place known for its mild winter climate, bitter oranges and Mudejar architecture, but in the event only three hardy Striders met up at Manchester Airport for the flight to Seville. We got off to an inauspicious start when a passenger (presumably a priority passenger) was taken ill before we ever alighted the plane and we had to wait for them to be taken off and put in an ambulance before we could get on. Once on the plane we were told that French air traffic controllers had gone on strike and our departure time was still uncertain. Happily, despite continental Europe being an hour ahead, this being southern Spain we found, when we did eventually arrive, a bar not only open but still serving tapas. Fantastic. This place became our local for the duration.

The next day it was a 40 minute walk to the sports hall for registration. It wasn’t immediately obvious that only certain of the people standing behind the desk were actually doing the registering, but having got over that hurdle, the process was speedy and efficient. The goody bag was exceptional containing t-shirt (nice fabric, good design and well-fitting), hat, a sachet of Ariel, a carton of chicken soup, a can of Coca-cola and a pot of quinoa salad and we were handed a bottle of beer each on the way out. In terms of our aspirations for the race, Peggy was at pains to point out that this was a training run for his next marathon and he was not aiming for a fast time. Nancy and I just wanted to get round.

Any plans for an early night before the race were scuppered by Peggy’s suggestion, that we naively went along with, of a football match – Seville v Granada. With Seville being fourth in the La Liga this seemed like a good prospect until we found out that the start time was not 8.00pm as we had been led to believe, but 9.00pm. And the football stadium (we got the right one) was a 40 minute walk away. Staggering back to our Airbnb not long before midnight we were hoping for a few hours decent sleep but apprehension about the following day and the dustbin men coming round the streets at 1.30am put paid to that.

Up and breakfasted before dawn we set off on the 40 minute walk (there is a theme here) to the race start. The route is intended to take in the iconic sights of Seville and starts in the palm tree lined Parque Maria Luisa, developed for the 1929 exhibition. As the sun rose we realized that the two straight bars under a cloud that had appeared on my weather app the night before meant ‘fog’. This was not an eventuality we had considered but it meant that the temperature at the start line was a perfect 11 degrees.

Although there was a complete absence of signage, we found the extensive toilet queue, bag drop and start pens without any difficulty. Before we knew it, we were off. The route follows the wide Avenida along the north bank of the Rio Guadalquivir for 4 kilometres. Initially I was running with Nancy who spotted a statue on the river bank holding a drawn bow and arrow. Nancy immediately identified this as being Robin Hood. I pointed out that the figure was in fact that of a naked female, but Nancy nonetheless insisted it was Robin Hood. I thought this was the time to run ahead as I could see we were going to fall out about it.

The route then crosses the river past the entrance to the Magic Island Park, the delights of which one could only guess at, and turns back east for 6 ½ kilometres. The river is again crossed and the first section repeated, giving a second opportunity to see the Robin Hood statue and the Torre del Oro (which isn’t gold). The route then turns right and winds its way through the city centre and the most iconic bits. Where there are interesting old buildings there tend to be lots of tourists and this was certainly the case here. Coach loads, focusing only on their next picture spot, simply stepped into the path of the oncoming runners. How many PBs were lost we will never know. The route then got a bit windy through narrow streets where people were expecting just to do a quiet bit of shopping and chat to their friends and made no effort to move out of the path of the runners. The marshals were a bit thin on the ground at this point, and if one had not been able to keep the runner in front in sight, one could easily have taken a wrong turn. The route then returned to the Parque Maria Luisa and a double loop around the beautiful Plaza de Espana. My appreciation of the architecture was marred by someone being resuscitated and police men and ambulances rushing towards the spot. It is strongly suspected that one of our number was unable to appreciate the architecture because they missed this bit out – or maybe they experienced a Strava blip.

The runners we spoke to were really friendly – mainly Spanish but we saw Dutch, Polish, French and Italian and a good sprinkling of English including a party of our very own Porter Valley Plodders, who, from their results, really need to ditch the Plodder bit. For much of the route the crowd support was great – once I appreciated that the cries of ‘Animo’ were not a personal insult but the imperative tense of the verb animar. At the finish there was a rather splendid medal, water, and – in this city of oranges – a banana! And there was beer if you were willing to join the very long queue.

It later transpired that I was second lady in my age group (a very small field) and I was invited to an awards ceremony on 27th February. I quickly sent instructions home to start looking for flights only to receive a correction e-mail saying that the event was on Monday 27th January at 5.00pm – 20 minutes after our flight home.

Would we do it again? As Peggy said: ‘Its very Moorish’.

There were 9453 runners. The winner and first male was Eyob Faniel in 01.00.44. First lady was Izabela Trzaskalska. 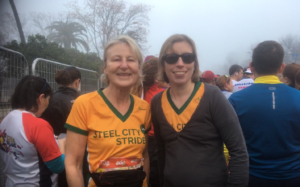 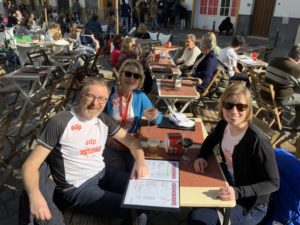