Unsurprisingly there are four villages in the half marathon route,  Helsby, Dunham on the Hill, Mouldsworth and Manley. Essar, which I kept looking out for is actually the sponsor, not a pretty village in Cheshire. Essar boasts that it is a key player in the nations fuel and power supply, ‘to keep things moving’.

Keeping moving was extremely important yesterday at my first race of the year. First it was absolutely freezing on that side of the country. Second, the toilet queue was at a standstill, the company which had promised additional portaloos having failed to keep us moving. Thankfully as I shivered and waited my turn the lovely Ben Heller and Fufi took care of the baggage drop leaving me to admire my goosepimples.

A cursory warm up around the sports centre car park trying to avoid the men weeing in the bushes and at 10:30, huddled like penguins in a crowd of more than 2000 hopefuls we were away. Billed as the Challenge Awards ‘Best half marathon in the north’, Essar served as the England qualifying race for the championships in Fleet in March and the Northern Masters 2020 Championship half marathon. By Sheffield standards it’s not too hilly, just 485’ ascent though much of that towards the end of the race when the body is trying to conquer the brain by saying ‘enough’.

The route is along quiet country lanes and describes a shamrock, each leaf being the road into and from each of the four villages. I had made a pact with myself not to do my usual trick of going off as if chasing Eilish McColgan and try and maintain a steady 8 minute mileing until mile 11 when I would put in a push to the finish if I could. It worked well. My breathing stayed just the comfortable side of rasping and my legs, frozen from the ankle down still, found their stride and stuck with it. I used the runners around me to help keep that pace until I saw the 11 mile marker and then tentatively pushed the pace, not knowing if there was another hill to sap me until the welcome final village and finish gantry. The plan worked. An average 7:50mmp gave me enough at the end to record 7:15 in mile 12 and 7:28 in the run to the finish which was just as well as I noted I won my category in 1:43:39 chip, just 1 second ahead of the second place in age. That result gave me a 2020 England vest for Fleet, the NMAC F65 half marathon title and a nice bottle of champagne  to ease the stiff muscles.

I ran in memory of my friend Rosie Elmore who died peacefully on the morning of the race of lung cancer. Rosie, mother of Helen Elmore, Dark Peak, was a regular at Hallam Parkrun and ran a half marathon last year. I believe the womens age category at Percy Pud was raised to 75 in her honour, a fitting tribute to a fine older athlete.

The winner was Mohammad Abu-Rezeq, unattached in 1:06:14. First female was Eleanor Whyman-Davis, unattached in 1:14:31. Sheffield’s Paul Fauset of Dark Peak stormed it with a new lifetime PB in 1:12:48 giving him 12th placing, second M45 and a place in the England Championships in March. Eight Striders  ran, with Hal Roberts leading the group in 1:19:30 and Helen Burgess first F in 1:36:07. There were 2023 runners of whom 663 were women. 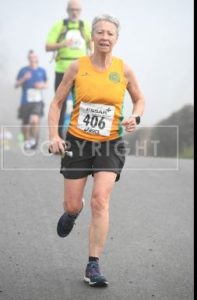