We were sat in a restaurant in Tsiliivi, Zakynthos and I was finishing a pint of Mythos, waiting for my main when the alarm went off on my phone. Without hesitation I picked my phone up, clicked on the Hardmoors page and booked a booked a place on my first ever half marathon. Plenty of time to prepare for it I told Mandy, and returned to holiday mode.

Fast forward to the 9th of February, Saltburn leisure centre and I’m checking my kit thinking, ‘I don’t belong here, totally out of my league’. This doubt was fuelled by three things, admitting to myself that my preparation for this wasn’t up to scratch. Not all of this down to me admittedly. Mandy’s dad had died two weeks earlier, so she was understandably concerned about me being out on the cliff tops, especially as storm Ciara was waiting for us when we got up there.

10 am and we were off, 160ish runners heading down the road leading from the leisure centre. After half a mile a marshal directed us into woodland, where a well-defined trail headed downhill. After going down a flight of steepish steps a marshal indicated for us to carry straight on. This was the first of a set of detours, which had been put in place on the advice of Cleveland Mountain Rescue. After running along the sea front for about 10 minutes we arrived at the bottom of the cliffs leading us up to the Cleveland Way. After climbing a set of steep steeps we arrived on the cliff tops. When I initially arrived on the tops, it was blowing, and hammering it down, but it wasn’t anything that overly concerned me…

That changed after about 10 minutes, the cliff path narrowed and the promised winds duly obliged. For about a 2 mile it was a case of gingerly running through the mud, then grabbing hold of the wire fence when the wind got up. I noticed my race number was hanging on to my bottoms by a thread. While I was pondering how to secure it back on with one hand, one of the other runners noticed it and offered to pin it back on. Before I could answer, the lady was pinning the last corner back in place. This encapsulated the real sense of togetherness among the runners that I spoke to.

After about 5km we were heading down towards the beach and running through sand dunes, soon arriving at checkpoint 1. I grabbed a handful of jelly beans, peanuts and a few Jaffa cakes. Despite having a mouthful of sugar and salt one of the marshals deciphered that yes please, when he asked if I’d like my water bottle filled. After ringing Mandy has promised, off I went, over a bridge and arrived at an even steeper set of steps. The wind was not letting up, so I was relieved when the second detour of the day took avoided a path marked ‘warning sheer cliff’. Again a marshal was on hand to make sure we all got the message. Although the detour did take us up a ridiculously steep hill, which didn’t get any less appealing when a marshal directed us up another hill.

Here we left the CW and headed inland, climbing over a stile, followed almost immediate by another.  The route then headed over a number fields, where the marshals were getting a battering from Ciara. After climbing another stile, we headed down to Skinningrove, via the Cleveland Way. It was not long after this that I decided I was done. My back, which I’ve never had issues with was really aching. I seemed to be doing far more fast walking than running. The wind was relentless, and my peregrine’s may have well been ice skates with all the mud filling the lugs.

Again, it was the other runners who helped get me past this blip. Two runners I’d spoken to earlier came back down the field and gave me a talking to. This gave me a bit of a boost, and after eating another one of the cereal bars I was carrying, my mind won the day. After reaching the second checkpoint minutes later, I gave my number and I was off. After about half a mile I was heading up the Cleveland Street trail, via yet more steps. We were all really strung out now, I was running with one other guy, and there was no sight of anyone else.  We ran through a small village called Carlin How, caught up with a few more runners and rejoined the Cleveland Street Trail.

After running through a few more fields, we arrived at a railway crossing where I had another look at my watch..9 miles! I’d remembered from the route description that the last checkpoint was at 10ish miles, which only left a 5k. After a few more fields and woodland we arrived in the village of North Skelton. We rejoined the Cleveland Street trail, where another marshal directed us to another marshal🙂 She then directed us through a farmyard, up a steep hill where we were greeted by the final checkpoint. I decided to take have a short breather, finish the last of the Jaffa Cakes, then off I went, heading towards Skelton .

We arrived at a small housing estate, where we were greeted by what I’m assuming was a family of four encouraging us home, the first spectators I’d seen all day. After crossing a couple of fields, I found myself running through a large entrance into woodland. Saltburn woods. Again, I found myself running alone, but I was fine with that. It was all about seeing if I could do it. I reached a three way junction in the woods and was unsure which one would get me up onto the road to the leisure centre. Just as I was taking my pack off to find the route description, two marathon runners came bounding down the hill. One of them stopped in front of me and said ‘follow me’….as if! At least I knew which path to take.

Reaching the top, I turned right and could see the leisure centre, a couple of runners on the other side started to cheer me on. My legs felt like jelly, but I was aware that I’d almost finished my first ever half marathon. Mandy suddenly appeared at the leisure centre car park entrance, jumped up and down between taking pictures. More runners who were leaving stopped to cheer me on through the car park. Mandy was running at the side of me, congratulating me. The marshal at the top of the stairs leading into the sports hall shouted my number through the open fire doors to the time keeper…

I stepped inside, confirmed my name. I’d done it. My first half marathon, my first Hardmoors. There’s no substitute for preparing for a race, but sometimes life gets in the way. Sometimes you just have to dig in. 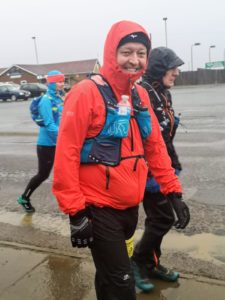