There were four green Steel City Striders buffs on display at the Haweswater Half Marathon: Nick Burns, Ian Stinson, Steve Haake and Richard Pegg.  About 10 miles south of Penrith, the race describes itself as being a “hilly course that offers an exhilarating run in unique surroundings.”  When it says ‘hilly’ rather than ‘undulating’ you know you’re in trouble – individual Strava traces gave it anything between 286 and 452 metres of elevation. It was certainly exhilarating: a 20 mph head wind battered you most of the way out, leaving you light-headed on the way back.  The scenery was fantastic: snowy tops, Haweswater brim full with foamy waves cascading down its dam wall in a direct copy of our very own Derwent dam.

The organisation was fantastic as were the marshals (Syd Burns – father of the less famous Nick – was his usual ebullient self!).  No medals or t-shirts: instead, a commemorative mug filled with an unending stream of tea or coffee followed by a piece of flapjack.  A fantastic event, all for a miserly £17.60.  Get your 2021 application in now! 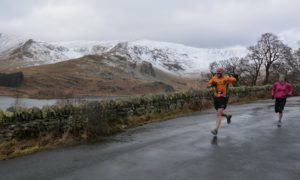